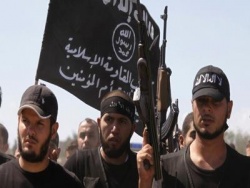 
Author's Note It is difficult to call this week’s gathering in Montreux, Switzerland, a "peace conference" on Syria, since the U.S. and its allies are determined to change the regime by force of arms. Washington has forged an "unholy alliance" with its "Wahhabi allies from Saudi Arabia and al-Qaeda," who act as America’s "boots on the ground."

"The most effective fighters are the al-Qaeda linked jihadists armed by the U.S. and the Saudi government."

There is one thing that the so-called peace conference on Syria is guaranteed to achieve and that is that when the last speech is made and the delegates leave the hall, the grotesque bloodletting and devastation will continue for the people of Syria. Why? Because for the Obama Administration, the diplomatic process was never intended to bring about a peaceful resolution to the war. Its main purpose was always to affect their main strategic objective – the removal of President Bashir al-Assad from power and the disappearance of Syria as an independent state.

Fidelity to this goal continues to drive U.S. policy. U.S. strategists care little about the fact that, in their quest to oust the Syrian President, they have created an unholy alliance between the U.S. and its Wahhabi allies from Saudi Arabia and al-Qaeda as their “boots on the ground.” It is an alliance that ensures that, should the Al-Assad government fall, the Syrian people will either live under totalitarian fundamentalist Wahhabi rule or see their country disappear as a coherent state and into warring factions.

By juxtaposing U.S. rhetoric that expresses concerns for democracy, pluralism and the human rights of the Syrian people with actual U.S. decisions, we see a dramatic illustration of the astonishing hypocrisy of U.S. policies. The Obama Administration understood the scale of human suffering it would unleash in Syria by arming, funding, training and providing political support for the opposition—opposition that it moved from a non-violent protest movement to a violent insurgency, as part of its larger geo-strategic plan for the region.

That is why commitment to regime change, rather than to a peace based on Syrian realities and the needs of the Syrian people, is the price of admission to this week’s conference in Montreux, Switzerland. It is a conference that it would be more accurate to call a ‘war conference’ rather than a ‘peace conference’ due to U.S. Secretary of State Kerry’s insistence on keeping the scope of the agenda confined to the terms of the Geneva I communique, which calls for a political transition in Syria. [1]

"Is Syrian’s future already written from the Libyan experience?"

The Syrian National Coalition is a mirage. Its “Free Syrian Army” has no standing and the most effective fighters are the al-Qaeda linked jihadists armed by the U.S. and the Saudi government. They are now the real power brokers on the ground.

For these fighters, Geneva II is an irrelevant sideshow that has no bearing on them and they have rejected the Western-backed Syrian National Coalition. So who does the Syrian National Coalition represent, when the bulk of the fighters have shifted to al-Qaeda and the other more than 1,000 Islamist rebel groups that between them have 100,000 fighters, all united in their commitment to a post-Assad state in which Sharia, or Islamic Law, will be established throughout Syria?

Yet on January 16, Kerry restated the U.S. position on Geneva 2.:

"It is about establishing a process essential to the formation of a transition government body — governing body — with full executive powers established by mutual consent,"

The consent of whom? Who assumes power and will a new government represent the aspirations for democracy, civil liberties, workers’ rights, respect for religious and community difference that the “revolution” promised or is Syrian’s future already written from the Libyan experience?

There are now voices inside and outside the Administration saying that the U.S. should abandon the Syrian National Coalition and work instead with the Salafi-Wahhabi fundamentalists who have joined together under the umbrella of the Islamic Front (IF) and are being presented as the “moderate” alternative to the radicalism of al-Qaeda. However, the Syrian people, who have a history of secularism and respect for different religions, have not signed on to a post-Assad society and government ruled by a group that has publicly stated its opposition to democracy and intention to establish an Islamic state under Sharia law.

“In the end the interests of the Syrian people are of little concern to these policymakers who prioritize U.S. imperialist interests above every other consideration.”

But who cares what the Syrian people want? It does not seem to matter to the U.S. that supporting Salafi-Wahhabi fundamentalism is the antithesis of the justification it gave for supporting the “revolution” against al-Assad. It does not matter because in the end the interests of the Syrian people are of little concern to these policymakers who prioritize U.S. imperialist interests above every other consideration.

In the long annuls of crimes by U.S. and Western imperialism, the slow, protracted destruction of the Syrian state, including the tens of thousands of lives sacrificed, is starting to emerge as one of its most significant crimes. It can be listed with crimes like the Christmas season carpet bombing of North Vietnam in 1972 and the millions murdered in Iraq during the period of sanctions and full-blown military attack.

In this era in which war is peace and wars are fought for “humanitarian purposes,” it is hard for many to get to the truth. But one thing is certain—the humanitarian disaster in Syria that was supposed to be the justification for intervention by the U.S. and its allies will continue unabated for the foreseeable future.