Document:The Tragedy of Gaza was all foreshadowed in the Bible 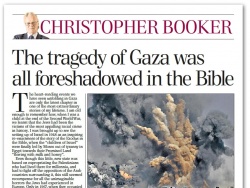 Image right: Screen-grab of original article. This article was considered too sensitive to appear in the Sunday Telegraph.

Christopher Booker has been at the top of British journalism since the 1960s and his weekly piece for the Sunday Telegraph is the most-read column in the paper. At about 6pm on Saturday 2 August 2014, his submission for publication on the following day was pulled by editorial control. It began with a piece on Israel – about "the mockery of Israel’s claim to be a proper democracy" and its "rigid identification of race with right"; criticism that was simply too critical of the 'Chosenite' Zionist state for The Telegraph.

In spite of its scathing criticism, prompted by Israel's Orwellian-named "Operation Protective Edge" in Gaza, it nonetheless confirms Booker's acceptance of the orthodox Official Narrative of "The Holocaust" and The Jews as history's essential victims; obligatory obeisances for any establishment journalist which, though irritating, makes it all the more powerful.

★ Start a Discussion about this document
Israel indentifies 'race with right'

The heart-rending events we have seen unfolding in Gaza are only the latest chapter in one of the most extraordinary stories of my lifetime. I am old enough to remember how, when I was a child at the end of the Second World War, we learnt that the Jews had been the victims of the most appalling racial crime in history. I was brought up to see the setting up of Israel in 1948 as an inspiring re-enactment of the story of the Exodus in the Bible, when the "children of Israel" were finally led by Moses out of tyranny in Egypt towards their Promised Land "flowing with milk and honey".

Even though this little, new state was based on expropriating the Palestinians who had lived there for millennia, and had to fight off the opposition of the Arab countries surrounding it, this still seemed recompense for all the unimaginable horrors the Jews had experienced in Europe. Only in 1967, when they occupied yet more Palestinian lands and began to build their "settlements", did I come to see that biblical story in a new light.

The Book of Deuteronomy 7 records the speech made by an ageing Moses, just before his followers crossed into their Promised Land. He begins by reminding them of how he had brought down the Ten Commandments from Mount Sinai, telling them they must not kill, steal or covet their neighbours' property. But he then goes on to say that this land would not contain only milk and honey – it would be full of all the tribes who lived there, to whom the Jews must show "no mercy". Those commandments, it seemed, applied only to fellow Jews.

And of course the rest of the Old Testament is full of what followed, as the Children of Israel were perpetually at war with the "Philistines" and all those whose lands they had occupied. The lesson then, as it has come to be seen again in our own time, is that the Jews saw their identity as rooted above all in their race. Only with the New Testament came that liberating message from Jesus and St Paul that our human identity lies not in belonging to one racial group but in treating all human beings alike, Jew or Gentile, as equally "children of God".

The central problem faced by Israel is that, for all its astonishing achievements, it has sought fiercely to preserve the purity of its racial identity. It has been unable to allow any real assimilation – beyond a few Arabs in the Knesset – which makes a mockery of Israel's claim to be a proper democracy. It has treated outsiders almost as ruthlessly as Moses exhorted his followers to treat those tribes in his time. And inevitably that has driven the Palestinians in return to ever more desperate and ruthless fanaticism, giving rise to all those pathetically one-sided conflicts we have seen over the past 70 years, culminating in the latest catastrophe in Gaza.

The real tragedy of Israel, imprisoned in its rigid identification of race with right, is that it has accumulated such resentment across the Middle East that, one day, some of those fanatics may somehow be able to call on enough power to lash back in some fearful act of Armageddon. If the ancient story leads to such a terrible outcome, it will be because, uniquely in the world, too many of its people cannot see their neighbours as equal fellow members of the human race.