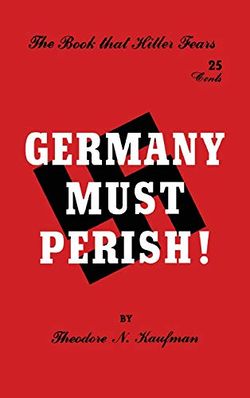 This book is a startling illustration of why, between the Treaty of Versaille which ended the first world war and the outbreak of world war two, the broad mass of ethnic Germans came to view their Jewish population with feelings ranging between deep suspicion and downright dislike. It is a racist polemic illustrating the views of powerful interests among the victorious WWI Allies and is as vicious as anything produced by the NAZI's themselves. It goes a long way to explaining how NAZI policies towards the Jews came about.
See Also

★ Start a Discussion about this document
Germany Must Perish

Introductory note to this pdf edition by Mark Weber

Theodore N. Kaufman, the author of Germany Must Perish, was a Manhattan-born Jewish businessman who was also chairman of a group that called itself the "American Federation for Peace." The first edition of this slim volume was published in 1940 or early 1941. A second, 96-page edition, which sold for 25 cents, was published in 1941 by Argyle Press of Newark, New Jersey. Both editions were issued when the United States was still officially neutral, that is, before the Pearl Harbor attack of December 7, 1941, that brought the U.S. openly into World War II.

Kaufman's fervent proposal for the systematic sterilization of the entire German population was given respectful attention in the American press, including reviews in a number of newspapers. A review in the weekly Time magazine, March 24, 1941, called Kaufman's plan a "sensational idea."

Germany's propaganda chief, Joseph Goebbels, seized with delight on the book. "This Jew [Kaufman] has done a disservice to the enemy," Goebbels privately commented. "If he had composed the book at my behest he couldn't have done a better job."

At his direction the German press played up Kaufman's call for genocide. A front page article about the book in the Berlin daily Der Angriff, July 23, 1941, appeared under headlines that called it a "Diabolical Plan for the Extermination of the German People" and a work of "Old Testament Hatred." Extracts also appeared, for example, in the nationally-circulated weekly paper Das Reich, August 3, 1941.

A plan similar to Kaufman's was issued during the war year s by a prominent American anthropologist. In an article headlined "Breed War Strain Out of Germans" in the New York daily newspaper P.M., January 4, 1943, Ernest Hooton laid out an "outbreeding" plan that would "destroy German nationalism and aggressive ideology while retaining and perpetuating desirable German biological and sociological capacities." (See also: Benjamin Colby, ‘Twas a Famous Victory, 1974, p. 131.)

The Harvard University professor's proposal called for genetically transforming the German nation by encouraging mating of German women with non-German men, who would be brought into the country in large numbers, and of German men, forcibly held outside of Germany, with non-German women. Ten to twelve million German men would be assigned to forced labor under Allied supervision in countries outside of Germany to rebuild their economies. "The objects of this measure," wrote Dr. Hooton, "include reduction of the birthrate of 'pure' Germans, neutralization of German aggressiveness by outbreeding and denationalization of indoctrinated individuals."

This plan, Hooton estimated, would require at least 20 years to be implemented. "During this period," he went on, "encourage also the immigration and settlement in the German states of non-German nationals, especially males." In the decades since the end of World War II, something of the spirit of the genocidal Kaufman and Hooton plans seems manifest in Germany's population and immigration policies. Since the nation's defeat in 1945, the German birth rate has fallen to below the replacement level, millions of racially and culturally alien migrants have been welcomed as settlers in Germany, the number of children of mixed ethnicity has sharply increased, and the ethnic-cultural character of much of the country has been drastically altered, especially in the larger cities.