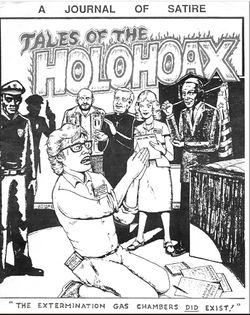 Booklet  by Michael Hoffman dated 2000Subjects: The Holocaust
Example of: Satire
Source: On the Contrary (Link)

The Booklet is available on Wikispooks for educational/research purposes and as a matter of public record, in that it was the main evidentiary document that secured the conviction and jailing of Simon Shepherd and Stephen Whittle at Leeds Crown Court, UK on 10 July 2009 on charges relating to its distribution by them.

WARNING. The content of the booklet is likely to be offensive to Jews and others schooled in the Official Narrative of "The Holocaust".
If you do not wish to be offended, then do not read it

"Several years ago I decided to withdraw Tales of the Holohoax from circulation because it was being pirated without the inclusion of my explanatory essay on satire, which had been published at the end of the comic, and because the comic book itself had become a source of misunderstanding concerning the nature of my scholarship" 27 November 2009 Link