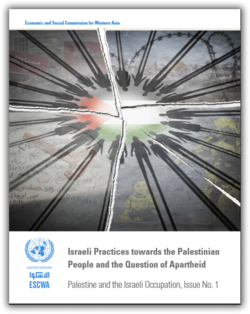 This report was originally posted on the UN ESCWA web site. It was removed within a day or two following protests by Israel. Under Secretary General Rima Khalaf, head of ESCW, resigned immediately in protest. [1]

Author's Note This report was prepared in response to a request made by member States of the United Nations Economic and Social Commission for Western Asia ( ESCWA ) at the first meeting of its Executive Committee, held in Amman on 8 and 9 June 2015. Preliminary findings of the report were presented to the twenty - ninth session of ESCWA, held in Doha from 13 to 15 December 2016. As a result, member States passed resolut ion 326 (XXIX) of 15 December 2016, in which they requested that the secretariat “publish widely the results of the study

The authors of this report, examining whether Israel has established an apartheid regime that oppresses and dominates the Palestinian people as a whole, fully appreciate the sensitivity of the question. Even broaching the issue has been denounced by spokespersons of the Israeli Government and many of its supporters as anti - Semitism in a new guise. In 2016, Israel successfully lobbied for the inclusion of criticism of Israel in laws against anti - Semitism in Europe and the United States of America, and background documents to those legal instruments list the apartheid charge as one example of attempts aimed at “destroying Israel’s image and isolating it as a pariah State”.

The authors reject the accusation of anti - Semitism in the strongest terms. First, the question of whether the State of Israel is constituted as an apartheid regime springs from the same body of international human righ ts law and principles that rejects anti - Semitism: that is, the prohibition of racial discrimination. No State is immune from the norms and rules enshrined in the International Convention on the Elimination of All Forms of Racial Discrimination, which must be applied impartially. The prohibition of apartheid, which, as a crime against humanity, can admit no exceptions, flows from the Convention. Strengthening that body of international law can only benefit all groups that have historically endured discrimina tion, domination and persecution, including Jews.

Secondly, the situation in Israel - Palestine constitutes an unmet obligation of the organized international community to resolve a conflict partially generated by its own actions. That obligation dates formally to 1922, when the League of Nations established the British Mandate for Palestine as a territory eminently ready for independence as an inclusive secular State, yet incorporated into the Mandate the core pledge of the Balfour Declaration to support the “Jewish people” in their efforts to establish in Palestine a “Jewish national home”. Later United Nations Security Council and General Assembly resolutions attempted to resolve the conflict generated by that arrangement, yet could not prevent related proposals, such as partition, from being overtaken by events on the ground. If this attention to the case of Israel by the United Nations appears exceptional, therefore, it is only because no comparable linkage exists between United Nations actions and any ot her prolonged denial to a people of their right of self - determination.

Thirdly, the policies, practices and measures applied by Israel to enforce a system of racial discrimination threaten regional peace and security. United Nations resolutions have long recognized that danger and called for resolution of the conflict so as to restore and maintain peace and stability in the region.

To assert that the policies and practices of a sovereign State amount to apartheid constitutes a grave charge. A study aimed at making such a determination should be undertaken and submitted for consideration only when supporting evidence clearly exceeds reasonable doubt. The authors of this report believe that evidence for suspecting that a system of apartheid has been imposed on the Palestinian people meets such a demanding criterion. Given the protracted suffering of the Palestinian people, it would be irresponsible not to present the evidence and legal arguments regarding whether Israel has established an apartheid regime tha t oppresses the Palestinian people as a whole, and not to make recommendations for appropriate further action by international and civil society actors.

In sum, this study was motivated by the desire to promote compliance with international human rights law, uphold and strengthen international criminal law, and ensure that the collecti ve responsibilities of the United Nations and its Member States with regard to crimes against humanity are fulfilled. More concretely, it aims to see the core commitments of the international community to upholding international law applied to the case of the Palestinian people, in defence of its rights under international law, including the right of self - determination.