Henri Curiel was a left-wing political activist in Egypt and France. Born in Egypt, Curiel led the communist Democratic Movement for National Liberation until he was expelled from the country in 1950.

Settling in France, Curiel aided the Algerian Front de Libération Nationale and other national liberation causes, including in South Africa and Latin America.

In 1978 Curiel was assassinated in Paris; his murderer has never been identified, but suspects include the South African Bureau of State Security; Mossad, with use of its Abu Nidal front group; the right-wing OAS; and the French intelligence service SDECE.

Curiel was born in Cairo to an Italian Sephardic family.[1] He became an Egyptian citizen in 1935.[2] His brother Raoul Curiel became a respected archaeologist and numismatist, specializing in Central Asian studies. A cousin was Eugenio Curiel, a physicist and anti-fascist militant who was murdered in Italy in 1945. Another cousin was the noted British KGB spy George Blake. The latter said that the older Curiel had been influential as a communist in shaping his political views, as Blake met him as a teenager.[3]

His son is the French journalist Alain Gresh, who was born in Cairo in 1948 and grew up in Paris.[4]

The Democratic Movement for National Liberation was an active participant in the 1952 revolution led by the free officers and Gamal Abdel Nasser. The revolutionary council and the free officers had many members from HADETU; the most eminent of these were Khaled Mohy el din, Yousef Sedeek and Ahmed Hamroush. Curiel settled in France and led a circle of Jewish communist emigres from Egypt known as the "Rome Group".

Curiel worked for the Jeanson network which supported the Front de Libération Nationale (FLN) during the Algerian War (1954–62). He was arrested by the French security services in 1960. Curiel was a founder of "Solidarité", a support group for various anti-colonial and opposition movements in the Third World (in particular Africa and Latin America), such as the African National Congress (ANC).

In 1976 he initiated contacts with Israeli and Palestinian representatives willing to negotiate a mutual recognition. Several meetings, later known as the "Paris talks", were organized.[5] Under the chairmanship of Pierre Mendès France, they included Issam Sartawi, adviser to Yasser Arafat; and Uri Avnery[6] and Mattityahu Peled, members of the Israeli Council for Israeli-Palestinian Peace (ICIPP).

On 21 June 1976, Georges Suffert published an article in Le Point reporting Curiel as the "head of the terrorist support network", connected with the KGB. He was put under house arrest in Digne, an administrative measure that was lifted once the accusation was demonstrated to be untrue.[7]

An American CIA report from 1981 (a Special National Intelligence Estimate) said that Curiel's organization "has provided support to a wide variety of Third World leftist revolutionary organizations", including "false documents, financial aid, and safehaven before and after operations, as well as some illegal training in France in weapons and explosives." The authors further comment that his group's "association with non-communist and nonviolent leaders, including clergymen, has tended to cloak the nature and extent of its operations."[8] 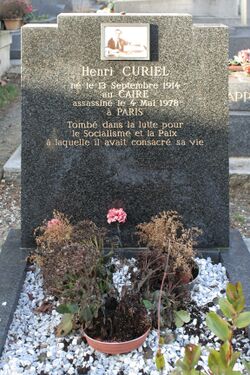 Henri Curiel was assassinated in Paris on 4 May 1978. Two far-right groups (OAS and the Charles Martel Group) claimed responsibility, but the case is still unsolved.

Curiel's work in promoting dialogue between the PLO and left-wing Israelis was continued throughout the 1980s by the Comité Palestine et Israël Vivront , headed by Sorbonne lecturer Joyce Blau – Curiel's close associate and fellow Egyptian exile.[12]

Henri Curiel appears in several parts of the 1982 spy thriller Shadow of Shadows by Ted Allbeury, whose plot is focused on George Blake. Allbeury takes at face value the assertions of Curiel having been a KGB agent, and assumes that for some time in the 1950s Curiel was Blake's KGB contact – for which there is no historical proof of any kind.

This page imported content from Wikipedia on 01 January 2021.
Wikipedia is not affiliated with Wikispooks.   Original page source here
Retrieved from "https://wikispooks.com/w/index.php?title=Henri_Curiel&oldid=200147"
Categories: