Sir James Wilson Vincent Savile OBE KCSG was DJ turned celebrity who worked a lot with children. The subject of innuendo for decades before his death, he was publicly outed posthumously as an "extravagant sexual predator, using his access to hospitals as a volunteer porter and fundraiser to abuse victims aged from 5 to 75."[1] He continued his predation on the vulnerable with the knowledge and support of senior UK establishment figures, raping and sexually abusing hundreds of children. Allegations against him went uninvestigated for decades, but coalesced quickly after his death, leading to hope that the VIPaedophile child abuse rings might be properly exposed. 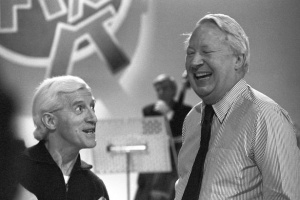 On Edward Heath's recommendation, Savile was awarded an OBE in 1972 and was recommended by Margaret Thatcher for a knighthood as Sir Jimmy Savile in 1990.[2]

“The thing about me is I get things done and I work deep cover, [...] I’ve known the Royal Family for a million years.”
Jimmy Saville [3]

After Saville died, many indepedent witnesses came forward to testify to his predatory and macabre bahviour, in which he was still engaged at the age of 82.[4] Typical reports include: