Martin McDaid is a former Royal Marine and member of the Special Boat Service[1] who reportedly converted to Islam and changed his name to Adbullah Mohammed. He appears to have lead a group of Muslims, including Mohammad Sidique Khan and Shehzad Tanweer. Martin Gilbertson, a computer specialist, reported his suspicions to the UK Police who would later neither confirm nor deny that he had done so.[2]

Martin McDaid is quoted in the Mirror as stating that "I'm an ex-anti-terrorist operator. I spent one and a half years with the Special Forces - with the Special Boat Service. I finished nearly 15 years ago."[1] 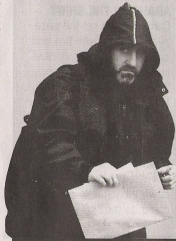 After the 2005 London Bombings, Martin McDaid appears to have disappeared. He was "last seen in 2007 masquerading as an English Instructor at Sohar College in Oman."[3]