Michael Crick (born 21 May 1958) is an English broadcaster, journalist and author. He was a founding member of the Channel 4 News team in 1982 and remained there until joining the BBC in 1990. He started work on the BBC's Newsnight programme in 1992, serving as political editor from 2007 until his departure from the BBC in 2011. Crick then returned to Channel 4 News, as political correspondent.[1]

Michael Crick studied Philosophy, Politics and Economics at New College (Oxford)and graduated with a first class honours BA degree. At Oxford, he was editor of the student newspaper, Cherwell; founded both the Oxford Handbook and the Oxbridge Careers Handbook; chaired the Democratic Labour Club and the Young Fabians; and was president of the Oxford Union in Michaelmas Term 1979, succeeding Theresa May's future husband Philip.[2]

After university, Crick started work at ITN as a trainee journalist in 1980. He was a founding member of the Channel 4 News team when the programme was launched in November 1982. During his period as their Washington correspondent (1988–1990) Crick won an award from the Royal Television Society for his coverage of the 1988 Presidential election between George Bush senior and Michael Dukakis.[3] 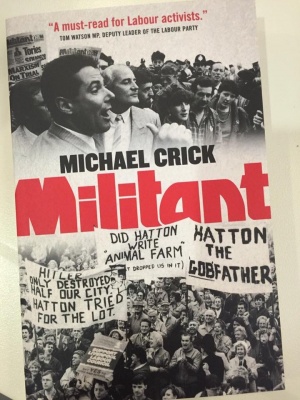 Michael Crick first published Militant in 1984, when the still-infamous leftwing sect was approaching the peak of its notoriety. In 1986 he produced an updated version, with the reds-under-the-bed title "The March of Militant". Thirty years on, he has updated it again, with a foreword and afterword that seek to connect the sometimes startling, often caricatured history of Militant to Jeremy Corbyn, both back in the 80s and now.

The connections feel a bit oversold. “This is the story,” writes Crick, “of the Marxist, Trotskyist group whose presence inside the Labour Party Jeremy Corbyn tried to defend.” Yet Crick has to concede early on that “Corbyn was never anywhere near being a member of Militant." What’s more, his 80s opposition to what he called an anti-Militant “witch-hunt” was widely shared on the Labour left. In the divided, feuding party of the time, purges and stopping purges were a preoccupation for many factions, as they sought to build useful alliances or weaken those of their enemies.[4]

It seems that in the wake of Labour leadership challenge Michael Crick has now decided to re-issue his book titled "Militant". The front cover has been changed to show pictures of a lot of angry looking, placard waving people led by Derek Hatton. It also carries a front cover recommendation by no other than Tom Watson who hails it as a "Must read for every Labour Party activist." It's all about how Militants infiltrated the Labour Party...

Michael Crick certainly knows how to fuel fear and make a profit at the same time...Coincidence?[5]