Saidit is an alternative to Reddit that is less corporate in tone and content. It was started on October 11, 2017. The site code is open source.[1] 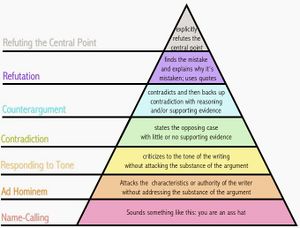 The "Pyramid of Debate" referred to in the policy

The Saidit policy refers to the "Pyramid of Debate"and states that "if a person is caught repeatedly dragging discussion in a downward direction on the Pyramid of Debate, they will be removed", but that "If we each take the Pyramid of Debate seriously, we can have a great website for exploring new ideas and having respectful, rational, conversations with other people. You can do your part by voting, commenting, and posting, to help move the culture at Saidit in a good direction."[2]

Since late 2018 the site has been publishing a warrant canary every month.[3]

On June 1, 2019, SaidIt was down for about 7 hours after experiencing a DDoS attack. In 2020 it experienced many DDOS attacks.