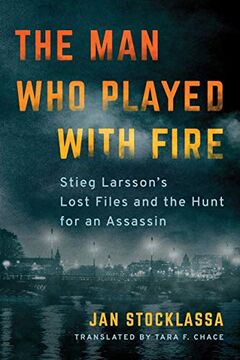 Jan Stocklassa, born 1965, is a former Swedish diplomat and businessman who served as the Swedish commercial counsellor for the Swedish Trade Council, the commercial section of the embassy, in Prague, Czech Republic from 1997 to 2003.[1]

Stocklassa is the author of the novel Gripen av Prag, a fictionalised account based on his experiences when it emerged that a Czech supersonic jetfighter deal involving Saab and British Aerospace had shown signs of corruption.[2]

He has since served at a senior level on the board of Boss Media, a Swedish-based supplier of online gambling software infrastructure,[3] and previously as head of the international division of software company Svenska Spel.[4]

In 2018 his book Stieg Larssons arkiv, translated in English as "The Man Who Played with Fire: Stieg Larsson's Lost Files and the Hunt for an Assassin"[5] in which Stocklassa investigates the assassination of Olof Palme, was published. The theories presented in the book are based on crime writer Stieg Larsson's research into the Swedish far right and its possible connections to the assassination.[6]

This page imported content from Wikipedia on 4 March 2020.
Wikipedia is not affiliated with Wikispooks.   Original page source here
Retrieved from "https://wikispooks.com/w/index.php?title=Jan_Stocklassa&oldid=223403"
Categories: