Olof Palme led the Swedish Social Democratic Party from 1969 to his assassination in 1986, and was a two-term Prime Minister of Sweden, heading a Privy Council government from 1969 to 1976 and a cabinet government from 1982 until his death. Electoral defeats in 1976 and 1979 marked the end of Social Democratic hegemony in Swedish politics, which had seen 40 years of unbroken rule by the party.

While leader of the opposition, Olof Palme divided domestic and international interests and served as special mediator of the United Nations in the Iran–Iraq War, but returned to power as Prime Minister after stunning electoral victories in 1982 and 1985.

Olof Palme was born into an upper-class, conservative family in Östermalm, Stockholm, Sweden. His father, a businessman, was of Dutch ancestry, and his mother, Freiin von Knieriem, was of Baltic German origin and had arrived in Sweden as a refugee in 1915. Great-grandfather Alexander von Knieriem (1837 - 1904) was an attorney general of the Senate of Russian Empire, senator and member of the State Council of Imperial Russia.[1] Palme's father died when he was six years old. Despite his upper-class background, his political orientation came to be influenced by Social Democratic attitudes. His travels in the Third World, as well as the United States, where he saw deep economic inequality and racial segregation, helped to develop these views.

A sickly child, Olof Palme received his education from private tutors. Even as a child he gained knowledge of two foreign languages. He studied at the Sigtuna School of Liberal Arts, one of Sweden's few residential high schools, and passed the university entrance examination with high marks at the early age of 17. He did his military service and became a reserve officer with the rank of captain. After military service he enrolled at the University of Stockholm.[2]

On a scholarship, he studied at Kenyon College, Ohio 1947–1948, graduating with a Bachelor of Arts degree.[3] Inspired by radical debate in the student community, he wrote a critical essay on Friedrich Hayek's The Road to Serfdom. Palme wrote his senior honor thesis on the United Auto Workers union, led at the time by Walter Reuther. After graduation he travelled throughout the country and eventually ended up in Detroit, where his hero Reuther agreed to an interview which lasted several hours. In later years, Palme regularly remarked during his many subsequent American visits, that the United States had made him a socialist, a remark that often has caused confusion. Within the context of his American experience, it was not that Palme was repelled by what he found in America, but rather that he was inspired by it.[4]

Palme attributed his becoming a socialist to three major influences:

In 1953, Olof Palme was recruited by the social democratic prime minister Tage Erlander to work in his secretariat. From 1955 he was a board member of the Swedish Social Democratic Youth League and lectured at the Youth League College Bommersvik. He also was a member of the Worker's Educational Association.

In 1957 he was elected as a Member of Parliament representing Jönköping County in the directly-elected First Chamber (Första kammaren) of Sweden's Riksdag. In the early 1960s Palme became a member of the Agency for International Assistance (NIB) and was in charge of inquiries into assistance to the developing countries and educational aid. In 1963, he became a member of the Cabinet - as Minister without Portfolio in the Cabinet Office, and retained his duties as a close political adviser to Prime Minister Tage Erlander. In 1965, he became Minister of Transport and Communications. One issue of special interest to him was the further development of radio and television, while ensuring their independence from commercial interests. In 1967 he became Minister of Education and, the following year, he was the target of strong criticism from left-wing students protesting against the government's plans for university reform. The protests culminated with the occupation of the Student Union Building in Stockholm; Palme came there and tried to comfort the students, urging them to use democratic methods for the pursuit of their cause.[5] When party leader Tage Erlander stepped down in 1969, Olof Palme was elected as the new leader by the Social Democratic party congress and succeeded Erlander as Prime Minister.

As leader of a new generation of Swedish Social Democrats, Olof Palme was often described as a "revolutionary reformist".[6][7] Domestically, his socialist views — especially the Social Democrat drive to expand Labour Union influence over business — engendered a great deal of hostility from more conservatively inclined Swedes.

Olof Palme carried out major reforms in the Swedish constitution such as orchestrating a switch from bicameralism to unicameralism in 1969 and in 1975 replacing the 166-year-old Instrument of Government (at the time the oldest political constitution in the world after that of the United States) with a new one officially establishing parliamentary democracy rather than de jure monarchic autocracy, abolishing the Privy Council of Sweden and stripping King Carl XVI Gustav of most powers held even by ceremonial monarchs in Denmark, Norway and the United Kingdom.

His reforms on labour market included establishing a law which increased job security. In the Swedish 1973 general election the Socialist-Communist and the Liberal-Conservative blocs got 175 places each in the parliament. The Palme administration continued to govern the country but several times they had to draw lots to decide on some issues, although most important issues were decided through concessional agreement.[8]

Under Olof Palme's government matters concerned with child care centres, social security, protection of the elderly, accident safety, and housing problems received special attention. Under Palme the public health system in Sweden became efficient, with the infant mortality rate standing at 12 per 1,000 live births. [9] An ambitious redistributive programme was carried out, with special help provided to the disabled, immigrants, the low paid, single-parent families, and the old.[10] The Swedish welfare state was significantly expanded from a position already one of the most far-reaching in the world during his time in office,[11] while tax rates rose from being fairly low even by European standards to one of the highest levels in the Western world. Olof Palme's last government, elected during a time when Sweden's economy was in difficult shape, sought to pursue a "third way," designed to stimulate investment, production, and employment, having ruled out classical Keynesian policies as a result of the growing burden of foreign debt, together with the big balance of payments and budget deficits. This involved "equality of sacrifice," whereby wage restraint would be accompanied by increases in welfare provision and more progressive taxation. For instance, taxes on wealth, gifts, and inheritance were increased, while tax benefits to shareholders were either reduced or eliminated. In addition, various welfare cuts carried out before Olof's return to office were rescinded. The previous system of indexing pensions and other benefits was restored, the grant-in-aid scheme for municipal child care facilities was re-established, unemployment insurance was restored in full, and the so-called "no benefit days" for those drawing sickness benefits were cancelled. Increases were also made to both food subsidies and child allowances, while the employee investment funds (which represented a radical form of profit-sharing) were introduced.

As a forerunner in green politics Olof Palme was a firm believer in nuclear power as a necessary form of energy, at least for a transitional period to curb the use of fossil fuel.[12] His intervention in Sweden's 1980 referendum on the future of nuclear power is often pinpointed by opponents of nuclear power as saving it. Nuclear power remains one of the most important sources of energy in Sweden, much attributed to Palme's actions.

On 21 February 1968, Palme (then Minister of Education) participated in a protest in Stockholm against U.S. involvement in the Vietnam War together with the North Vietnamese Ambassador to the Soviet Union Nguyen Tho Chan. The protest was organised by the Swedish Committee for Vietnam and Palme and Nguyen were both invited as speakers. As a result of this, the U.S. recalled its Ambassador from Sweden and Palme was fiercely criticised by the opposition for his participation in the protest.[13]

On 23 December 1972, Palme (then Prime Minister) made a speech on Swedish national radio where he compared the ongoing US bombings of Hanoi to historical atrocities, namely the bombing of Guernica, the massacres of Oradour-sur-Glane, Babi Yar, Katyn massacre, Lidice, the Sharpeville massacre and the Treblinka extermination camp. The US government called the comparison a "gross insult" and once again decided to freeze its diplomatic relations with Sweden (this time the freeze lasted for over a year).[14]

Despite such associations and contrary to stated Social Democratic Party policy, Sweden had in fact secretly maintained extensive military co-operation with NATO over a long period, and was even under the protection of a US military security guarantee.

In response to Palme's remarks in a meeting with the US ambassador to Sweden ahead of the Socialist International Meeting in Helsingør in January 1976,[15] Kissinger asked the US ambassador to "(...) convey my personal appreciation to Palme for his frank presentation (...).[16]

Shortly before his assassination, Palme had been accused of being pro-Soviet and not sufficiently safeguarding Sweden's national interest. Arrangements had therefore been made for him to go to Moscow to discuss a number of contentious bilateral issues, including alleged Soviet submarine incursions into Swedish waters.[17] 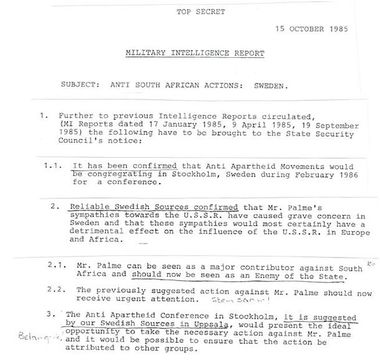 An alleged SADF Military Intelligence report, dated 15 October 1985, concluded that Palme "should be seen as an enemy of the State." He was assassinated in February 1986. 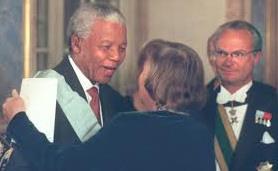 Olof Palme was assassinated in Sweden on 28 February 1986 whilst walking home from a cinema with his wife. A decidedly problematic Official Narrative of the assassination suggests that it was the work of a "lone nut". Evidence is gradually emerging that his assassination was a deep event, including a document from October 1985 before his assassination that stated that "should be seen as an enemy of the State."[18]

Stig Engström, an advertising consultant was named as a "lone nut" suspect in the murder case by authorities on 10 June 2020, 34 years since Mr Palme was assassinated in central Stockholm. Since he died in 2000, the investigation was closed.[19][20] 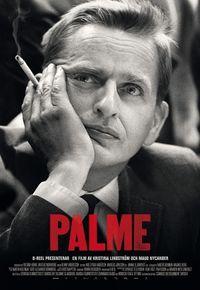 Palme is a Swedish documentary film premiered in Sweden on 14 September 2012 and written by Maud Nycander and Kristina Lindström. The film is a biographical portrait of the former prime minister Olof Palme, and covers his life from childhood to the role as a leading figure of Swedish politics. On general release in 2012, it has been shown as a 103-minute long feature film, and as a 175-minute long TV-movie in three parts on SVT at Christmas and New Year.[21]

On Friday evening, February 28, 1986 Olof Palme was shot dead in the street. The day after, news reached out to the people that the country's prime minister was dead, and the whole country found itself suddenly shocked. The film follows Palme's life from his youth until he is assassinated. It contains material from Palme's family that has never been shown in public, private snapshots and family movies.

A Olof Palme victim on Wikispooks

This page imported content from Wikipedia on 19 March 2013.
Wikipedia is not affiliated with Wikispooks.   Original page source here