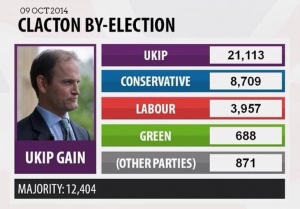 Andy Graham was the parliamentary candidate for the Liberal Democrats at the Clacton by-election that was caused by the resignation of Tory MP Douglas Carswell who defected to the UK Independence Party, forcing the vote on 9 October 2014 - just seven months before next year's General Election.[1]

"People can make their own minds up, but it's costing £100,000 for a by-election that didn't need to be called. I believe he should have waited and I'm sure I do not speak alone - but now we have the by-election, let's give it a chance."

Andy Graham is the former mayor and local councillor of Bishops Stortford in Hertfordshire and was formerly a teacher in Clacton.[2]

Douglas Carswell was elected in the by-election with 21,113 votes. Andy Graham came 5th with 483 votes, the Lib Dems thus losing their deposit.

A professional actor on stage and TV, Andy Graham brought the stage version of "Sense and Sensibility" to Clacton's West Cliff Theatre 10 years ago and says:

"I am hoping to bring some 'Sense and Sensibility' to Clacton in this by-election".

Andy Graham is a writer of stage plays and children's books, including one about the effects of the 9/11 attacks on a child. He was the founder and Artistic Director of Snap Theatre Company (1979-2005) which worked in local schools in Clacton.

Andy Graham is a Director of the International education charity Ai Ai Ltd.[3]

Clacton Liberal Democrats have made just the right choice to counter all the xenophobia which will be flying around in the by-election, if this interview with Andy Graham is anything to go by.

Yes, Andy is coming over very well. Persuasive on the doorsteps.[4]