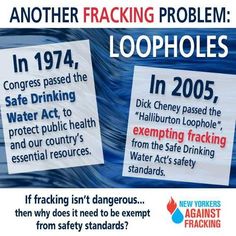 The Cheney Loophole, also known as the Halliburton loophole[1] is an exemption to the Federal Energy Policy Act of 2005 that allowed the fracking industry to circumvent the Safe Drinking Water Act by exempting fracking fluids.

In 2005, at the urging of Vice President Cheney, this loophole was inserted, fast tracking shale fracking as a source of cheap natural gas.[2][3]