Civil asset forfeiture, or Civil seizure is the forced removal of property by authorities without having to prove that it was gained illegally. While people are assumed innocent unless proved guilty, this is not sufficient in some countries (notably the USA) to prevent their property being forfeit. If they wish to try to get back the seized property, owners must prove, at their own expense, that it was not accrued through criminal activity. In 2014, the total value of property taken by USA government agencies exceeded the amount stolen from USA citizens by burglars.

Civil asset forfeiture was introduced under Ronald Reagan's expansion of the "war on drugs" although the practice of seizing assets dates back "at least to 17th-century maritime law, under which ships illegally transporting goods would be seized, along with the contraband inside."[1]

In 2016, California banned the practice unless the victims were found guilty of committing a crime.[2] As of 2017, the practice is drawing increasing criticism for bringing the law into disrepute[3] and even Wikipedia admits that the practice is "controversial".[4] 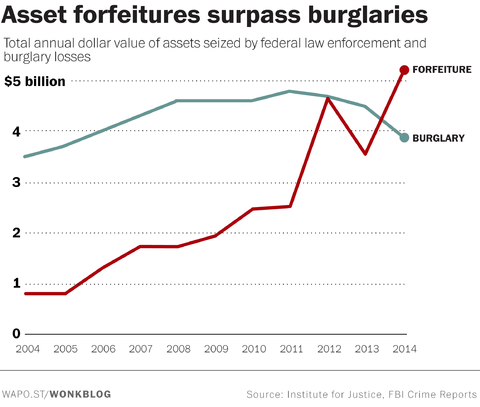 The practice is widespread in USA, but was abolished in New Mexico in 2015. Different standards of proof are required in different states. NYPD has draconian civil asset forfeiture laws.[5]

Even in cases when assets are returned to victims, legal costs are not refunded unless a formal judgment is returned, leading some agencies (including the DEA) to deliberately conclude a case by returning the forfeited assets at the conclusion of a case which they are going to lose, to prevent the verdict which would allows the victims to reclaim legal expenses. This has resulted in an 88% non-contest rate, according to one 2015 estimate.[6]