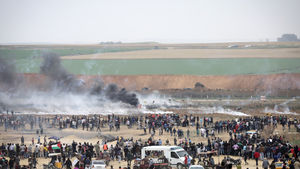 Palestinian civilians being killed by the IDF

Ken Loach, the award-winning British film director, has hit back at Belgian Prime Minister Charles Michel, after the leader claimed he should not receive an honorary degree because of alleged anti-Semitic comments.

Loach was responding to Michel at a press conference an hour before receiving his honorary degree from the Université libre de Bruxelles (ULB). He told assembled reporters that he was shocked to have to make a statement concerning the Belgian PM’s comments, especially as he understood that Michel had studied law at ULB.

“Is the law so badly taught here? Or did he not pass his exam?” Loach asked. “A good lawyer must examine the evidence before coming to a conclusion. Mr Michel, look at the evidence.”

Ken Loach responds angrily to Belgian PM in antisemitism row… THIS is how it is now... no evidence, no due process, whether it's accusations of bigotry or bombing Syria...

The previous night, Michel had been speaking at an event to mark the 70th anniversary of Israel’s creation, where much to the surprise of the audience, he commented on the impending honorary degree to be awarded to Loach, reports The Guardian.

In an apparent dig at Loach, he told the audience:

“No accommodation with anti-Semitism can be tolerated, whatever its form. And that also goes for my own alma mater [university].”

Loach has argued against accusations that Jeremy Corbyn’s [[Labour Party] has a distinct problem with anti-Semitism, claiming Labour MPs who took part in a recent protest in Westminster against anti-Semitism were using it for political gain, to undermine their leader. The director questioned whether or not the MPs should consequently be expelled from the party.

In his rebuttal at the hastily-convened press conference, Loach seemed to questioned Michel’s understanding of international law when it comes to the issue of Israel/Palestine, suggesting that the Belgian PM is conflating criticism of Israel with anti-Semitism.

The Belgian PM is yet to respond to Loach.