Document:Freedom and the Future of the Internet 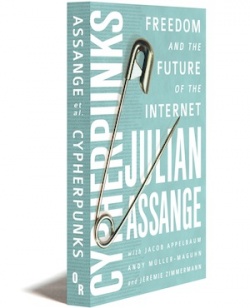 This is a highly informative book. It comprises a transcript of an extended 2012 conference between Julian Assange, Jacob Appelbaum, Andy Müller-Maguhn and Jérémie Zimmermann, derived from a four-part RT series with additional editorial material and a summarizing Introduction by Assange. Each of the participants has considerable first hand experience of the ways in which the Internet is being progressively suborned to the purposes of Elite power and authority through their involvement with Wikileaks and various cryptograpic initiatives.

The book was initially listed on Amazon but has since been removed (26 November 2012). Inquiries about this to Amazon have thus far yielded only content-free obfuscation of a standard 'corporate-speak' variety. Since Amazon is emblematic of the centralising forces heavily criticised in the book, it is probably safe to assume censorship of the type so cogently warned of. Gargantuan centralising authorities may have massive state-of-the-art technical capabilities, in other words, but that still does not exempt them from making spectacularly stupid decisions.

A Call to Cryptographic Arms

The world is not sliding, but galloping into a new transnational dystopia. This development has not been properly recognized outside of national security circles. It has been hidden by secrecy, complexity and scale. The internet, our greatest tool of emancipation, has been transformed into the most dangerous facilitator of totalitarianism we have ever seen. The internet is a threat to human civilization.

These transformations have come about silently, because those who know what is going on work in the global surveillance industry and have no incentives to speak out. Left to its own trajectory, within a few years, global civilization will be a postmodern surveillance dystopia, from which escape for all but the most skilled individuals will be impossible. In fact, we may already be there.

No description of the world survives first contact with the enemy.

We have met the enemy.

What is to be done?

Once upon a time in a place that was neither here nor there, we, the constructors and citizens of the young internet discussed the future of our new world.

We saw that the relationships between all people would be mediated by our new world, and that the nature of states, which are defined by how people exchange information, economic value, and force, would also change.

We saw that the merger between existing state structures and the internet created an opening to change the nature of states.

First, recall that states are systems through which coercive force flows. Factions within a state may compete for support, leading to democratic surface phenomena, but the underpinnings of states are the systematic application, and avoidance, of violence. Land ownership, property, rents, dividends, taxation, court fines, censorship, copyrights and trademarks are all enforced by the threatened application of state violence.

Most of the time we are not even aware of how close to violence we are, because we all grant concessions to avoid it. Like sailors smelling the breeze, we rarely contemplate how our surface world is propped up from below by darkness.

In the new space of the internet what would be the mediator of coercive force?

Does it even make sense to ask this question? In this otherworldly space, this seemingly platonic realm of ideas and information flow, could there be a notion of coercive force? A force that could modify historical records, tap phones, separate people, transform complexity into rubble, and erect walls, like an occupying army?

The platonic nature of the internet, ideas and information flows, is debased by its physical origins. Its foundations are fiber optic cable lines stretching across the ocean floors, satellites spinning above our heads, computer servers housed in buildings in cities from New York to Nairobi. Like the soldier who slew Archimedes with a mere sword, so too could an armed militia take control of the peak development of Western civilization, our platonic realm.

The new world of the internet, abstracted from the old world of brute atoms, longed for independence. But states and their friends moved to control our new world — by controlling its physical underpinnings. The state, like an army around an oil well, or a customs agent extracting bribes at the border, would soon learn to leverage its control of physical space to gain control over our platonic realm. It would prevent the independence we had dreamed of, and then, squatting on fiber optic lines and around satellite ground stations, it would go on to mass intercept the information flow of our new world — its very essence even as every human, economic, and political relationship embraced it. The state would leech into the veins and arteries of our new societies, gobbling up every relationship expressed or communicated, every web page read, every message sent and every thought googled, and then store this knowledge, billions of interceptions a day, undreamed of power, in vast top secret warehouses, forever. It would go on to mine and mine again this treasure, the collective private intellectual output of humanity, with ever more sophisticated search and pattern finding algorithms, enriching the treasure and maximizing the power imbalance between interceptors and the world of interceptees. And then the state would reflect what it had learned back into the physical world, to start wars, to target drones, to manipulate UN committees and trade deals, and to do favors for its vast connected network of industries, insiders and cronies.

But we discovered something. Our one hope against total domination. A hope that with courage, insight and solidarity we could use to resist. A strange property of the physical universe that we live in.

The universe believes in encryption.

It is easier to encrypt information than it is to decrypt it.

We saw we could use this strange property to create the laws of a new world. To abstract away our new platonic realm from its base underpinnings of satellites, undersea cables and their controllers. To fortify our space behind a cryptographic veil. To create new lands barred to those who control physical reality, because to follow us into them would require infinite resources.

And in this manner to declare independence.

Scientists in the Manhattan Project discovered that the universe permitted the construction of a nuclear bomb. This was not an obvious conclusion. Perhaps nuclear weapons were not within the laws of physics. However, the universe believes in atomic bombs and nuclear reactors. They are a phenomenon the universe blesses, like salt, sea or stars.

Similarly, the universe, our physical universe, has that property that makes it possible for an individual or a group of individuals to reliably, automatically, even without knowing, encipher something, so that all the resources and all the political will of the strongest superpower on earth may not decipher it. And the paths of encipherment between people can mesh together to create regions free from the coercive force of the outer state. Free from mass interception. Free from state control.

In this way, people can oppose their will to that of a fully mobilized superpower and win. Encryption is an embodiment of the laws of physics, and it does not listen to the bluster of states, even transnational surveillance dystopias.

It isn't obvious that the world had to work this way. But somehow the universe smiles on encryption.

Strong cryptography can resist an unlimited application of violence. No amount of coercive force will ever solve a math problem.

But could we take this strange fact about the world and build it up to be a basic emancipatory building block for the independence of mankind in the platonic realm of the internet? And as societies merged with the internet could that liberty then be reflected back into physical reality to redefine the state?

Recall that states are the systems which determine where and how coercive force is consistently applied.

The question of how much coercive force can seep into the platonic realm of the internet from the physical world is answered by cryptography and the cypherpunks' ideals.

If we do not, the universality of the internet will merge global humanity into one giant grid of mass surveillance and mass control.

We must raise an alarm. This book is a watchman's shout in the night.

On March 20, 2012, while under house arrest in the United Kingdom awaiting extradition, I met with three friends and fellow watchmen on the principle that perhaps in unison our voices can wake up the town. We must communicate what we have learned while there is still a chance for you, the reader, to understand and act on what is happening.

It is time to take up the arms of our new world, to fight for ourselves and for those we love.

Our task is to secure self-determination where we can, to hold back the coming dystopia where we cannot, and if all else fails, to accelerate its self-destruction.