Julian Assange, born Julian Paul Hawkins, is an Australian programmer and Internet activist. In 2006 he founded Wikileaks. Facing arrest, Assange took refuge in June 2012 in the Ecuadorian Embassy in London, where the UN Working Group on Arbitrary Detention (UNWGAD) reported he was being "arbitrarily detained". He was arrested in April 2019 and imprisoned in Belmarsh. In May 2019 allegations surfaced that he was being chemically tortured.[1][2][3]

Craig Murray observed at the time that:

Julian Assange was born in Australia to Christine Ann Hawkins, a visual artist, and John Shipton, an anti-war activist and builder, who separated before their son was born. His mother married Richard Brett Assange when Julian was a year old. Assange had a nomadic childhood, and had lived in over thirty Australian towns and cities by the time he reached his mid-teens, when he settled with his mother and half-brother in Melbourne, Victoria. His mother "became involved with Leif Meynell, also known as Leif Hamilton, a member of Australian cult The Family, with whom she had a son before the couple broke up in 1982."[5]

In 1986, he managed to hack into the Minerva system of mainframes operated by Australia's Overseas Telecommunications Commission in Sydney, as the entrance test into the Australian hacker community:[8]

Assange was determined to access Minerva, both for bragging rights and to exploit the mainframes' capabilities to run scanning and cracking programs or other netherworld adventures. But he needed a password.

And the only way he knew to get one was through what hackers call "social engineering", simply calling up a human being and conning him or her into divulging secrets.

Hence the noisy layers of Shakespearean tragedy that the altogether sane young man was producing. Assange's sound show was for the benefit of his cassette recorder, the better to simulate the background chaos of a busy office. A few minutes later, he had found a valid number within an OTC branch office in Perth. And using his uncannily deep sixteen-year-old's voice while the noise-tape played behind him, he became "John Teller", a trustworthy operator in the Sydney office trying to check a few data points corrupted by a crashed storage drive.

He dialled and a man picked up. Assange introduced himself and began the game. "The back up tape is two days old, so we want to check your information is up-to-date so your service is not interrupted," he casually told the man who answered, not missing a beat.

"Oh dear. Yes. Let's check it," Assange's mark responded in a concerned tone. Assange read out a list of easily accessible information for Minerva staff users that he had downloaded, carefully inserting an error into one user's fax number. The voice on the other end interrupted helpfully: "Oh no, that's wrong, our fax number is definitely wrong," he said.

So Assange tried to match his victim's worried tone and explained that they would need to confirm all the user's information. "Let's see. We have your account number, but we had better check your password...what was it?"

"Yes, it's L-U-R-C-H–full stop." Lurch. Assange was in. He politely ended the conversation, gave his target a call back number that rang eternally busy, and hung up, victorious in the greatest hack of his young life.[9]

Julian Assange was caught after a police raid in 1991, and charged in 1994 “with thirty-one counts of hacking and related crimes. In December 1996, he pleaded guilty to twenty-five charges (the other six were dropped), and was ordered to pay reparations of A$2,100 and released on a good behaviour bond. The perceived absence of malicious or mercenary intent and his disrupted childhood were cited to justify his lenient penalty.”[6]

Julian Assange is the author of "Cypherpunks: Freedom and the Future of the Internet", published in November 2012:

The harassment of WikiLeaks and other Internet activists, together with attempts to introduce anti-file sharing legislation such as SOPA and ACTA, indicate that the politics of the Internet have reached a crossroads. In one direction lies a future that guarantees, in the watchwords of the cypherpunks, "privacy for the weak and transparency for the powerful"; in the other lies an Internet that allows government and large corporations to discover ever more about internet users while hiding their own activities. Assange and his co-discussants unpick the complex issues surrounding this crucial choice with clarity and engaging enthusiasm.[10]

He is co-author with Suelette Dreyfus of "Underground: Tales of Hacking, Madness, and Obsession on the Electronic Frontier", published 1997, which

tells the extraordinary true story of the computer underground, and the bizarre lives and crimes of an elite ring of international hackers who took on the establishment. Spanning three continents and a decade of high level infiltration, they created chaos amongst some of the world's biggest and most powerful organisations, including NASA and the US military. Brilliant and obsessed, many of them found themselves addicted to hacking and phreaking. Some descended into drugs and madness, others ended up in jail. As riveting as the finest detective novel and meticulously researched, "Underground" follows the hackers through their crimes, their betrayals, the hunt, raids and investigations. It is a gripping tale of the digital underground.[11]

On 27 January 2022, United News of India reported that Julian Assange should be nominated for the Nobel Peace Prize.[12]

Stella Moris tweeted: "Nobel Peace Prize nomination deadline is 31 January 2022. Nominations are themselves protective, but a win would be so politically protective it would very likely secure Julian's freedom."[13]

Czech Republic's Markéta Gregorová MEP responded: "Hi Stella, I will be nominating Julian for the Nobel Peace Prize, as a Member of the European Parliament. I plan on doing so tomorrow (28 January 2022), we are wrapping up the nomination text right now. I would be happy to coordinate together!"[14] 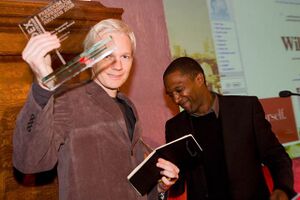 Assange receiving the Economist New Media Award at an Index on Censorship event in 2008,[15] the same year as the Julius Bär leak.[16]

In 2006, Assange set up Wikileaks, a website intended to publish leaked information. This has published a lot of information.

Since his organisation, Wikileaks, focuses on releasing information to the public that is intended to show government wrongdoing, his view on 9-11 is particularly notable:

“I'm constantly annoyed that people are distracted by false conspiracies such as 9/11, when all around we provide evidence of real conspiracies, for war or mass financial fraud.”
Julian Assange (19 July 2010)  [17]
By 2019, the original Belfast Telegraph page was changed to hide the 9-11 quote to anyone who had not logged in. The citation uses an archived version.

Webster Tarpley is highly critical for his public support for the 9-11/Official narrative and describes Wikileaks as a "modified limited hangout".[18] It is thinkable that he made the point (even if he wasn't pressed to do so) to make Wikileaks more acceptable to decisionmakers in the commercially-controlled media, at a time when he (still) had to focus on relationship building.

However, on April 20, 2019 Caitlin Johnstone disputes claim Assange is a CIA intelligence asset-limited hangout: "Debunking All the Assange Smears"[19] pointing out how can he possibly be a "CIA asset-limited hangout" and be imprisoned in Belmarsh, awaiting extradition to the U.S.? Note that Webster Tarpley stated Wikileaks is a modified limited hangout and not directly Julian Assange.

Brendon O'Connell offers an alternative explanation on Jan 5, 2022, Episode 90: "Assange, Snowden Russia And Israel"- The Great Game.[20] According to O'Connell, Assange worked for KGB and Russian security services as an asset, offering a video history of his hacking, before Wikileaks.