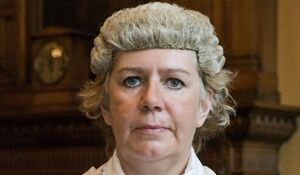 Lady Leeona Dorrian is "acting out of bias"

★ Start a Discussion about this document
Lady Dorrian's Law

For the avoidance of any doubt, this site does not believe that Scotland’s second most senior judge, Lady Leeona Dorrian, is corrupt.

It does not believe that she is acting at the behest of the Scottish Government or the First Minister, even though Lady Dorrian is known to wish to succeed Lord Carloway as the country’s most senior judge when he steps down in the near future and that position – Lord President of the Court of Session – is in the First Minister’s gift.

What this site does believe is that she’s acting out of bias. Lady Dorrian is known to wish to dispense with juries in sexual-assault trials,[1] and it’s our belief – based on observing her conduct during the trial of Craig Murray and her apparent emotional investment in the case – that that’s because she belongs to the sizeable group of people who fundamentally think that all acquittals in such cases are wrongful, and that in essence any man ever accused of rape or sexual assault is automatically guilty merely by dint of having been accused, on the grounds that no woman would ever lie about such a thing.

(Or more frighteningly, that a small minority of accusers DO lie but the false convictions or ruined lives of a few men are a price worth paying.[2])

Her actions, though – in jailing Craig Murray for eight months for a crime (so-called “jigsaw identification”) which is hopelessly ill-defined and for which nobody has ever been imprisoned before in all of world history – risk doing more to undermine the rights of women alleging sexual assault than any individual ever has before.

Craig Murray goes to prison without the benefit of a jury, having been denied the basic right to an appeal, and most remarkably of all, not knowing who he allegedly identified and how. In an extraordinary circumstance more befitting of a Franz Kafka novel, at no point has he been told specifically who he “jigsaw identified” or how, nor why he is the only person being held responsible for the construction of what is apparently and oxymoronically a one-piece “jigsaw”.[3] Only in serious terrorism cases are the most elementary principles of law and justice normally cast aside with such abandon.

And in whose name has this happened? The complainers in the Alex Salmond case were all either conspirators, liars or both. Despite having the benefit of resources unimaginable to ordinary women and the full weight of the state behind them, a mostly-female jury rejected every single one of their claims.

(Can you honestly imagine anyone alleging that a man once “pinged” their curly hair in a lift in the presence of other people going to the police and being taken seriously, to the point where the matter ended up in Scotland’s highest court?)

It is materially inescapable that at least some of the witnesses – most notably Woman H – were deliberately and knowingly lying, yet no investigations for perjury have been undertaken, in stark contrast to the millions of pounds of public money and hundreds of hours of police time which were wasted on trying to prove that Salmond once briefly touched someone’s leg during a 60-second journey in the back of a car.

Alex Salmond was cleared in court on every single charge, an innocent man. But Lady Dorrian’s seeming obsessive determination to protect even conspirators and perjurers from any consequences has led to an inescapable and grave conclusion.

[68] A notable feature of the affidavits is the repeated focus by the respondent on the absence of a court order prior to 10 March 2020 as meaning that had he wished to identify the complainers he could have done so prior to that date, “knowing there was no general law or court order in place preventing me simply from publishing”. This however “would not have been responsible journalism”. That it would have been a clear contravention of the IPSO Editor’s Code of Practice and of the local convention are not matters which appear to have engaged him, although it is clear from para 40 of his main affidavit that he was aware of the convention.

The quotes above are taken from Lady Dorrian’s judgement of 25 March this year. Others have already highlighted the deeply disturbing notion laid out in them that online journalists should be subjected to different interpretations of the law than those applied to newspaper journalists, on the comically absurd grounds that the latter are accountable to the “IPSO Editors’ Code Of Practice” – a toothless self-regulator that administers occasional mild slaps on the wrist and tiny corrections at the bottom of page 2 rather than prison sentences.

But what they also unavoidably imply is this: that in future, anyone knowing the names of complainers in a sexual-assault case should name them in public at the first available opportunity, loudly and repeatedly.

If Craig Murray had done so before Alex Salmond’s trial, he would have been breaking no law (assuming of course that he did so in a manner not prejudicial to the case, another law from which “mainstream” journalists are apparently exempt).[4]

He and anyone else could then have named them freely both during and after the trial when their claims were revealed to be fabrications, because obviously their identities would already be in the public domain.

In Scotland, unlike England, no automatic right of anonymity in sexual assault cases exists. It has to be specifically ordered by the judge in each case, something that didn’t happen until the first day of the Salmond trial after James Doleman of Byline Times directly named one of the complainers in a tweet, for which major breach he was merely admonished and excluded from the court on subsequent days.

(This is despite the fact that Byline Times is not subject to IPSO adjudication and indeed calls the organisation a “sham regulator”, and therefore by Lady Dorrian’s own ruling she should have treated Doleman more harshly than “proper” journalists.)[5]

This, clearly, would be a wildly undesirable state of affairs. Genuine victims – unlike the Salmond complainers – would be strongly dissuaded from making their complaints, in the knowledge that their names would be public and they themselves might be subject to intrusive and traumatic scrutiny in the press.

But it is the inescapable logic of Lady Dorrian’s judgement. Naming all of the Salmond complainers before the trial would have protected Craig Murray, and he wouldn’t be going to jail today (nor would Clive Thomson, who served a six-month sentence earlier this year for naming some of them on social media).[6]

His restraint and decency in not wishing to do so is what has condemned a frail and elderly man who represents no danger to the public to months of vindictive and health-endangering imprisonment, in direct contravention of the supposed presumption in Scotland against such sentences.[7]

We do not believe that that was Lady Dorrian’s intention. But it is the reality. If you don’t want to be imprisoned in Scotland for “jigsaw identification”, the only sure way to protect yourself is to name absolutely everyone before the trial.

The ruinous determination of the Scottish Government and the Scottish judicial system to put someone, anyone connected to Alex Salmond in jail out of the First Minister’s demented paranoia and sheer malice has had many disastrous outcomes, for individuals, taxpayers and the country as a whole. We could write an article 10 times as long as this one about all the terrifying aspects of the case. But this may be the worst of all.

If you’re a woman in Scotland and someone has raped or sexually assaulted you, Lady Dorrian has just made it far more dangerous for you to go to the police, because journalists – or at least, those journalists not loyal to the state – will now have to very seriously consider naming you immediately purely as a self-protection precaution.

Today is a terrible day for Craig Murray, journalism, freedom of speech, accountability, and the integrity and reputation of Scottish justice. But it’s also a terrible day for victims of sexual assault and rape, and for that everyone involved, from the First Minister and her fellow conspirators down, should hang their heads forever in shame.