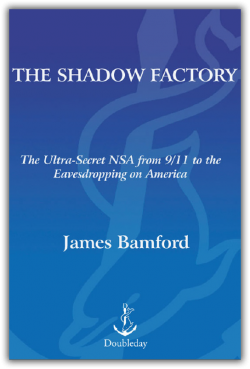 Image right: Book cover Taken from the Introduction to the eBooK edition

In northern Georgia near the South Carolina border, a few miles from Leburda’s Grits N’ Gravy and the Cracker Barrel Old Country Store, one of the most secret facilities in the world is undergoing a major expansion. When completed, it will likely be the largest eavesdropping facility ever created, employing more than four thousand civilian and military “voice interceptors” and other specialists. Run by the ultra-secret National Security Agency, it is where the agency eavesdrops on the Middle East and North Africa, thousands of miles away. Inside, behind barbed-wire fences, heavily armed guards, and cipher-locked doors, earphone-clad men and women secretly listen in as al-Qaeda members chat on cell phones along the Afghan border, and to insurgents planning attacks in Iraq. They also target and record American citizens in that region, including businesspeople, journalists, and Red Cross workers, as they engage in intimate conversations with their spouses back home and discuss confidential matters and business deals. “A lot of time you could tell they were calling their families,” said one of the NSA intercept operators who listened in on the Americans, “incredibly intimate, personal conversations . . . Basically all rules were thrown out the window, and they would use any excuse to justify a waiver to spy on Americans.”

By 2008, the NSA had become the largest, most costly, and most technologically sophisticated spy organization the world has ever known. It had also become the most intrusive, secretly filtering millions of phone calls and e-mails an hour—international and domestic—through equipment programmed to watch and listen for hundreds of thousands of names and phone numbers. To sift through it all, the agency has the world’s largest collection of data-eating supercomputers. Its newest, code-named “Black Widow,” is a colossal $17.5 million Cray computer made up of sixteen tall cabinets crammed with thousands of processors. It is able to achieve speeds of hundreds of teraflops—hundreds of trillions of opera - tions a second—and the NSA predicts that it will soon break the petaflop barrier, plowing through phone calls, e-mails, and other data at more than a quadrillion operations a second.

In its manic drive for information, the agency requires a city-sized headquarters complex that consumes so much energy that it is now in real danger of running out of power and going dark. It has already run out of space to store all of its data—data in which it is now drowning, ac - cording to the Congressional Research Service. “Whereas some observers once predicted that the NSA was in danger of becoming proverbially deaf due to the spreading use of encrypted communications,” the report said, “it appears that NSA may now be at greater risk of being ‘drowned’ in information.” The report added, “Some intelligence data sources grow at a rate of four petabytes per month now . . . and the rate of growth is increasing.” In a year at that rate, the NSA’s massive database would hold at least 48 petabytes, the equivalent of nearly one billion four-door filing cabinets full of documents. It would also be equal to about twenty-four trillion pages of text.

Among the few who know just how much data flows into the NSA is Eric C. Haseltine. The former head of Disney’s “Imagineering” labs, Haseltine was appointed as the agency’s associate director for research in 2002. Two years later he noted that even the NSA’s enormous computer power has trouble keeping up with the flow. “We in the NSA are encountering problems with the flood of information that people [in the outside world] won’t see for a generation or two,” he said. “We’ve been into the future and we’ve seen the problems” of a “tidal wave” of data. He added, “We can either be drowned by it or we can get on our surf - board and surf it and let it propel us. And, of course, that’s what we’re trying to do.”

If indeed the data flowing into the NSA is what the outside world will see two to four decades from now, the amount of information the agency is ingesting is truly astronomical. In fact, it may be rapidly moving from measuring the data by the petabyte to measuring it by the exabyte, which is 1,000 petabytes. By way of perspective, 200 petabytes is the equivalent of all printed material. Five exabytes (5,000,000,000,000,000,000 bytes), on the other hand, represents enough information to fill 37,000 new Libraries of Congress and more than all the words ever printed. This is the annual equivalent of a thirty-foot stack of books for every man, woman, and child on the planet.

No longer able to store all the intercepted phone calls and e-mail in its secret city, the agency has now built a new data warehouse in San Antonio, Texas. Costing, with renovations, upwards of $130 million, the 470,000-square-foot facility will be almost the size of the Alamodome. Considering how much data can now be squeezed onto a small flash drive, the new NSA building may eventually be able to hold all the information in the world.

The principal end product of all that data and all that processing is a list of names—the watch list—of people, both American and foreign, thought to pose a danger to the country. Once containing just twenty names, today it is made up of an astonishing half a million—and it grows rapidly every day. Most on the list are neither terrorists nor a danger to the country, and many are there simply by mistake. Some of the many innocent people on the list may discover their situation when they are tossed off a plane, as happened numerous times to Massachusetts senator Ted Kennedy. Others, however, may never know. Instead, their application for a Small Busi - ness Administration loan may be turned down without their being given a reason; or the application of a bright son or daughter for admittance into one of the military academies may be rejected without explanation; or, because the names are shared with foreign governments, a person could be turned away after landing in London for a vacation or business trip—without being told why.

Known as the Terrorist Identities Datamart Environment, or TIDE, it is the mother of all watch lists—the watch list from which all others, including the Do Not Fly list, are derived. Nevertheless, it sits ingloriously on a dated and inexpensive Dell laptop in the basement of the National Counterterrorism Center, maintained by the CIA.

In early September 2001 there was no TIDE, and the NSA was a littlenoticed agency attempting to downsize by a third and searching for a mission. A few days later it found its new mission—a mission that began with a phone call intercepted from a house on a dusty backstreet in Yemen