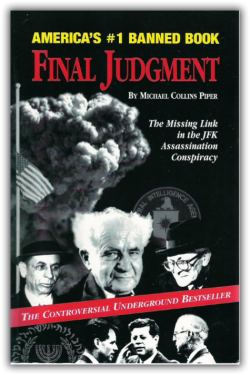 The Missing Link in the JFK Assassination Conspiracy

an ebook by Michael Collins Piper

This may be the most unusual cover of any book—and there have been many—published about the assassination of John F. Kennedy. But then, again, Final Judgment—like its cover—is extraordinary. The figures shown (left to right) are Meyer Lansky, the head of the global organized crime syndicate, David Ben-Gurion, the Israeli Prime Minister who resigned his post in 1963, disgusted with President John Kennedy's refusal to support Israel's drive to build a nuclear arsenal, and James J. Angleton who—in 1963—was the CIA's director of counterintelligence and head of the CIA's liaison desk for Israel's intelligence agency, the Mossad. Over Angleton's shoulder is the logo of the Central Intelligence Agency. In the background, of course, is a nuclear explosion. Israel achieved its nuclear weapons capabilities precisely because of the assassination of President Kennedy. And so did Red China. All of the frightening details appear in the pages of Final Judgment.

At the bottom are shown Attorney General Robert Kennedy and President Kennedy and their father, Ambassador Joseph P. Kennedy, founder of the Kennedy family's would-be dynasty. John Kennedy's assassination ended any possibility of another Kennedy reaching the White House. To the left is the logo of Israel's Mossad.

The Israeli Nuclear Arms Link to the JFK Assassination

For ten years Israeli propagandists called Final Judgment author Michael Collins Piper a "liar" and an "anti-Semite" for charging that Israeli intelligence played a role in the JFK assassination conspiracy because of JFK's bitter secret conflict with Israeli Prime Minister David Ben-Gurion over Israel's efforts to build nuclear weapons of mass destruction. Certain self-styled “JFK assassination researchers" scoffed at Piper and refused to address the thesis of his book.

However, on July 25, 2004, many of Piper's critics were red-faced and silent when Israel's respected Jerusalem Post carried a story headlined: "Vanunu: Israel behind JFK Assassination." The newspaper reported that famed Jewish-born nuclear physicist, Dr. Mordechai Vanunu, recently released after spending 18 years in prison for exposing Israel's covert atomic weapons program—had charged that supporters of Israel's drive for nuclear weapons were involved in the JFK assassination precisely because of JFK's interference with their ambitions.

The Israeli government dismissed Vanunu's allegations, but what he said received attention in newspapers worldwide, with the notable exception of the United States where one and only one newspaper, mentioned Vanunu's charges and that was American Free Press, the Washington-based weekly that published Final Judgment. However, as widely read Internet writer, Rev. Mark Dankof, put it quite correctly: "The Vanunu-Piper allegations about Israel will not go away."

As the second printing of the sixth edition of this book went to press, a source with intimate, high-level knowledge about the NUMEC nuclear plant in Pennsylvania that smuggled nuclear materiel to Israel (see Chapter 8) provided documentation to Michael Collins Piper that the family of Edith Rosenwald Stern, a prominent New Orleans Jewish leader, were key financiers behind NUMEC. Mrs. Stern was the closest friend of Clay Shaw, the longtime CIA asset charged by New Orleans District Attorney Jim Garrison in the JFK conspiracy. Final Judgment had already documented Shaw's ties to Israeli intelligence, so the NUMEC-Stern connection is all the more damning and, with other data, explains why Garrison ultimately concluded there was an Israeli connection behind the conspiracy. And note this: Another NUMEC investor was Pittsburgh's CIA-connected "right wing" billionaire Richard Scaife, whose protégé, Joe Farah, a vocal supporter of Israel, promoted a JFK conspiracy book evidently designed to distract attention from Final Judgment. No more need be said.