Not to be confused with Agence France-Presse (AFP), international news agency headquartered in Paris.

The American Free Press (AFP) is a US weekly newspaper. It was significant in its early part in exposing the Bilderberg Group. It has been charged with "one of the most absurd hoaxes yet floated to distract the 9/11 truth movement — the claim that the crash of Flight 93 never happened."[1]

The paper was founded in 2001 as the successor to The Spotlight, which ceased publication in 2001 when its parent company, Liberty Lobby, was forced into bankruptcy. The paper essentially continued as The Spotlight under a different name maintaining the same staff. The central figure for both papers was Willis Carto. 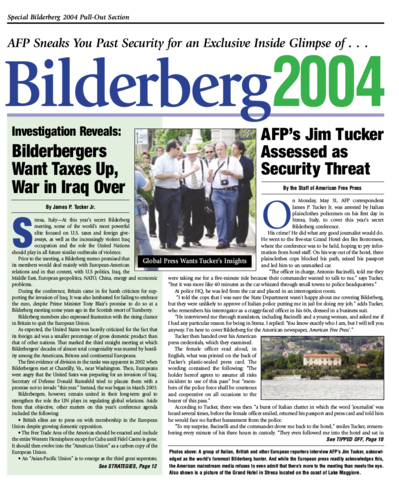 Veteran Bilderberg-watcher Jim Tucker worked for the AFP, and in 2004 they reported on the Bilderberg. They have since run dozens of articles on the group.[2]

The AFP fired Christopher Bollyn "6 weeks after being attacked and TASERed by undercover police at his home."[3]