Harry Jacob van den Bergh is a Dutch former parliamentarian for the PvdA. He mainly had foreign affairs and defense as a specialty.

From 1970 to 1972, he was a research assistant at the Koos Vorrink Institute. Until 1975 he was staff member of the parliamentary party of the PvdA, then international secretary. After the Carnation Revolution in Portugal, he was approached by Willy Brandt to smuggle (illegally) money that was intended for the Partido Socialista of Mário Soares. He obtained diplomatic status through party colleague Max van der Stoel, who was then Minister of Foreign Affairs.

From 1977 to 1987 he was member of the Lower House for this party. He left the House, discredited by allegations of insider trading with respect to Fokker shares.

In the nineties Van den Bergh was chairman of Safe Traffic Netherlands for a long time. In 1995 he became discredited after driving too fast on the motorway. He apologized for speeding, but did not retire as chairman.

From 2000 to 2012 he was chairman of Vluchtelingenwerk Nederland. He was succeeded by Jan van Zijl.

He then became a municipal councilor in Amstelveen and is also chairman of Humanity in Action. 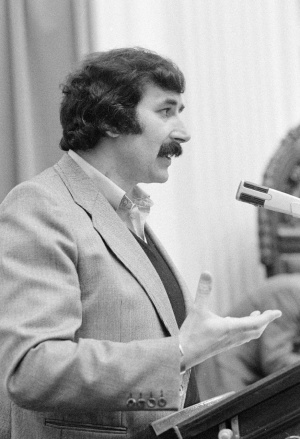 +
Has image2
File:532px-Tweede_Kamer_behandeld_begroting_Buitenlandse_Zaken,_Harry_van_der_Bergh_aan_het_woord_-_NL-HaNA_Anefo_931-3024_WM388.jpg +
Has imdb
http://www.imdb.com/name/nm4222898/ +
Has interest
"Terrorism" +
Has namebase
http://www.namebase.org/cgi-bin/nb01? VAN DEN BERGH HARRY +
Has noRatings
0 +
Has objectClass
Person +
Has objectClass2
Person +
Has posting
Vluchtelingenwerk Nederland/Chair +
Has powerbase
http://www.powerbase.info/index.php/Harry van den Bergh +
Has revisionSize
2,132 +
Has revisionUser
Robin +
Has wikipediaPage
https://nl.wikipedia.org/wiki/Harry van den Bergh +
Has wikipediaPage2
https://nl.wikipedia.org/wiki/Harry_van_den_Bergh +
Is not stub
true +
Has subobject"Has subobject" is a predefined property representing a container construct and is provided by Semantic MediaWiki.
Harry van den Bergh +