Ivar Bryce was a British spook and writer. During World War II Bryce worked for the British Security Coordination.[1]

In 1917 Bryce met Ian Fleming and his brothers on a beach in Cornwall and met Flemming again when he went to Eton.[1]

According to Thomas E. Mahl, the author of Desperate Deception: British Covert Operations in the United States, 1939-44 (1998): "Bryce worked in the Latin American affairs section of the BSC, which was run by Dickie Coit (known in the office as Coitis Interruptus). Because there was little evidence of the German plot to take over Latin America, Ivar found it difficult to excite Americans about the threat."[1] 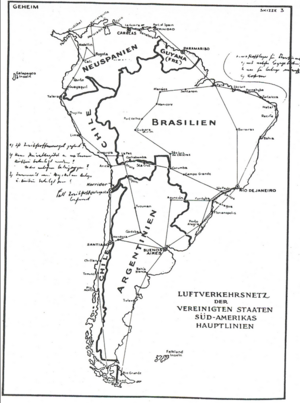 It was especially important for the British Security Coordination to undermine the propaganda of the American First Committee that had over a million paid-up members. Bryce recalls in his autobiography, You Only Live Once (1975): "Sketching out trial maps of the possible changes, on my blotter, I came up with one showing the probable reallocation of territories that would appeal to Berlin. It was very convincing: the more I studied it the more sense it made... were a genuine German map of this kind to be discovered and publicised among... the American Firsters, what a commotion would be caused."[1]

William Stephenson approved the idea and the project was handed over to Station M, the phony document factory in Toronto run by Eric Maschwitz, of the Special Operations Executive (SOE). It took them only 48 hours to produce "a map, slightly travel-stained with use, but on which the Reich's chief map makers... would be prepared to swear was made by them." Stephenson now arranged for the FBI to find the map during a raid on a German safe-house on the south coast of Cuba. J. Edgar Hoover handed the map over to William Donovan. His executive assistant, James R. Murphy, delivered the map to President Franklin D. Roosevelt. The historian, Thomas E. Mahl argues that "as a result of this document Congress dismantled the last of the neutrality legislation."[1]