John Scott Redd (born September 10, 1944) was a vice admiral of the United States Navy, and afterward the first Senate-confirmed Director of the National Counterterrorism Center, serving from 2005 until 2007.[1] According to David Martin at the CBS Evening News, "Scott Redd may be the most important person you've never heard of."[2]

J.J. Green at Federal News Radio referred to Redd as "the man that I often call "E.F. Hutton".[3] (an in-joke - E.F. Hutton is a defunct American stock brokerage firm with an ad "When E.F. Hutton talks, people listen.").

Redd was born in Sidney, Iowa, and graduated from the United States Naval Academy in the class of 1966. A Trident Scholar, he graduated second in his class, majoring in mathematics and physics. Following graduation, he studied as a Fulbright Scholar in Uruguay and as a Burke Scholar, receiving a Master of Science degree in Operations Analysis from the Naval Postgraduate School. He also attended the Program for Senior Executives at the Massachusetts Institute of Technology (MIT). 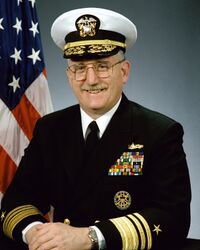 During his 36 years of active duty service he commanded eight organizations at sea including a ship and an aircraft carrier battle group and served in several senior policy positions in the Pentagon. In 1995, he proposed and founded the only new U.S. Navy Fleet in half a century, serving as the first Commander, Fifth Fleet (COMFIFTHFLT) since World War II.[4] His last assignment on active duty was as Director of Strategic Plans and Policy (DJ-5) on the Joint Staff.[5] Redd retired from active military service in 1998.

Following his retirement from the Navy he served as CEO of NetSchools Corp., a high-tech start-up company in the education sector, headquartered in Silicon Valley and Atlanta, Georgia.[6]

In early 2004 Redd was appointed deputy administrator and chief operating officer (COO) of the Coalition Provisional Authority (CPA) in Baghdad, Iraq. Redd, was one of two deputy administrators reporting to L. Paul Bremer, and directed programs for the reconstruction of Iraq's infrastructure. He was also responsible for policy affecting Iraq's security programs, including the new Iraqi Army, the Iraqi Civil Defense Corps, Iraqi Border Patrol and Facilities Protection Services.[7]

In 2005, Redd was nominated by President George W. Bush, confirmed by the Senate, and sworn in by Vice President Richard B. Cheney as the first Director of the National Counterterrorism Center. The NCTC has two core missions; to serve as the primary organization in the U.S. Government for analysis and integration of all terrorism intelligence, and to conduct strategic operational planning (SOP) for counterterrorism activities integrating all elements of U.S. national power. As Director of NCTC, Redd was responsible for preparing the National Implementation Plan, the first U. S. Government war plan for the global war on terror. The plan was approved by the President on June 26, 2006.

In a letter to the Intelligence Community dated 17 October 2007, Redd announced his intention to step down as Director of the NCTC, effective 10 November 2007. He cited medical concerns and the desire to spend more time with his family as reasons for his resignation. He subsequently underwent double knee replacement surgery.

He is also the past President of the Naval Academy Class of 1966 and has served on the advisory boards of several non-profit organizations. An avid amateur radio operator, Redd has won twelve world championships and nine national championships.