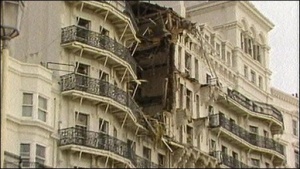 Investigators traced the source of the time bomb to Room 629, and began looking through the names of everyone who had stayed in the Grand Hotel in the month before the attack. They ruled out 800 people from 50 countries, and eventually homed in on Patrick Magee, after a fingerprint on the room card was said to have matched one taken years previously after a run-in with the law in Norwich, according to the BBC. (In August 2000, Magee is reported to have said: "If that was my fingerprint I did not put it there.")[2]

Police bided their time, and eventually traced Magee to a safe-house in Glasgow, the following summer. He was arrested on 22 June 1985 along with four other members of an IRA unit, including future Sinn Féin MEP Martina Anderson, who was then 23 years of age.[3]

Patrick Magee is often referred to as the "Brighton bomber."[4]

“Mrs Thatcher will now realise that Britain cannot occupy our country and torture our prisoners and shoot our people in their own streets and get away with it. Today we were unlucky, but remember we only have to be lucky once. You will have to be lucky always. Give Ireland peace and there will be no more war.” (IRA Statement, 13 October 1984)[5]

Patrick Magee was born in Belfast but moved with his family to Norwich when he was four years old. He returned to Belfast at the age of 20 in 1971 and later joined the Provisional IRA.[6]

In June 1973, he was interned during Operation Demetrius. He was released in November 1975.

The plot to bomb the Grand Hotel had started in 1981 as an act of revenge for the stance Thatcher had taken over the death of Bobby Sands and other republican hunger-strikers who had demanded political status in prison.[7]

Patrick Magee had stayed at the Grand Hotel in Brighton under the false name of Roy Walsh four weeks previously, during the weekend of 14–17 September 1984, when he planted the bomb, with a long-delay timer supplied by Provisional IRA quartermaster Fr Patrick Ryan, in the bathroom of his room, number 629.[8] The bomb exploded at 2:54 a.m. on 12 October 1984, killing five people and injuring 34. Magee was arrested in the Queen's Park area of Glasgow on 22 June 1985 with four other members of an active service unit who were planning further bombings.[9]

At his trial in September 1986 Magee received eight life sentences, with the judge branding him "a man of exceptional cruelty and inhumanity." While in prison, he completed an Open University PhD examining the representation of Irish Republicans in 'Troubles' fiction. In August 1997, he was married for a second time.

Patrick Magee was released from prison in 1999, having served 14 years in prison, under the terms of the Good Friday Agreement.

Originally he was sentenced to 8 life sentences and a minimum tariff of 35 years.[10] Jack Straw, the then Home Secretary, attempted to block Magee's release, but this was overturned by the High Court.[11]

Magee continues to defend his role in the blast, but he has expressed remorse for the loss of innocent lives.[12] One of the victims of the bombing was Sir Anthony Berry, whose daughter Jo Berry publicly met Magee in November 2000 in an effort at achieving reconciliation as envisioned in the wake of the Good Friday Agreement. They have met publicly on many occasions since.

Harvey Thomas, a senior adviser to Thatcher who survived the bombing, forgave Magee in 1998. Thomas has since developed a friendship with Magee, including hosting him in his own home. Thomas cited his Christian faith as the reason why he felt compelled to forgive.[13][14] Norman Tebbit, whose wife was paraylsed in the Brighton Bomb, has asserted he could only forgive Magee if he went to the police and provided them with the names of anyone else, who was responsible for the bombing. He has argued that giving up violence is insufficient, stating: "If Dr Harold Shipman had announced he was not going to murder any more of his patients, I don't think we would have felt that was a case for going 'good old Shipman' and giving him a slap on the back and a special award from the BMA."[15]