The Brighton bombing occurred on 12 October 1984 at the Grand Hotel in Brighton, England.[1]

A long-delay time bomb, thought to have been triggered by a Swiss MST-13 Timer and targeting Prime Minister Margaret Thatcher and her cabinet, who were staying at the hotel for the Conservative Party conference, was planted in the hotel by Provisional Irish Republican Army (IRA) member Patrick Magee.[2]

Thatcher narrowly escaped injury, but five people were killed, including two high-profile members of the Conservative Party, and 31 were injured.[3] 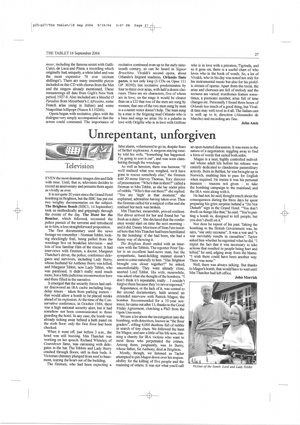 Twenty years on: "Unrepentant, unforgiven" published in The Tablet on 18 September 2004

Patrick Magee had stayed in the hotel under the pseudonym Roy Walsh during the weekend of 14–17 September 1984. During his stay, he planted the bomb under the bath in his room, number 629. Security forces had earlier discovered an IRA cache with long-delay timers, including a number made from video recorder components and a Memo Park timer safety device, that would allow a bomb to be placed weeks ahead of its explosion.[4]

IRA mole Sean O'Callaghan claimed that 20lb (9kg) of Frangex (gelignite) was used.[5] The device was described as a 'small bomb by IRA standards' by a contemporary news report, and may have avoided detection by sniffer dogs through being wrapped in cling film to mask the smell of the explosive.[6]

The bomb detonated at 2:54am on 12 October 1984. The midsection of the building collapsed into the basement, leaving a gaping hole in the hotel's façade. Firemen said that many lives were likely saved because the well-built Victorian hotel remained standing.[7] Margaret Thatcher was still awake at the time, working on her conference speech for the next day in her suite. The blast badly damaged her bathroom, but left her sitting room and bedroom unscathed. Both she and her husband Denis escaped injury. She changed her clothes and was led out through the wreckage along with her husband and her friend and aide Cynthia Crawford, and driven to Brighton police station.[8]

At about 4:00am, as Thatcher left the police station, she gave an impromptu interview to the BBC's John Cole, saying that the conference would go on as usual. Party treasurer Lord McAlpine persuaded Marks & Spencer to open early at 8:00am so those who had lost their clothes in the bombing could get new ones. Thatcher went from the conference to visit the injured at the Royal Sussex County Hospital.

Five people were killed, none of them government ministers. Those killed were Conservative MP Sir Anthony Berry, Eric Taylor (North-West Area Chairman of the Conservative Party), Lady Jeanne Shattock (wife of Sir Gordon Shattock, Western Area Chairman of the Conservative Party), Lady Muriel Maclean (wife of Sir Donald Maclean, President of the Scottish Conservatives), and Roberta Wakeham (wife of Parliamentary Treasury Secretary John Wakeham). Donald and Muriel Maclean were in the room in which the bomb exploded. Several more, including Margaret Tebbit — the wife of Norman Tebbit, who was then President of the Board of Trade — were left permanently disabled. Thirty-four people were taken to hospital and recovered from their injuries.

The IRA claimed responsibility the next day, and said that it would try again. Its statement read:

Mrs Thatcher will now realise that Britain cannot occupy our country and torture our prisoners and shoot our people in their own streets and get away with it. Today we were unlucky, but remember we only have to be lucky once. You will have to be lucky always. Give Ireland peace and there will be no more war.[9]

Margaret Thatcher began the next session of the conference at 9:30am the following morning, as scheduled. She dropped from her speech most of her planned attacks on the Labour Party and said the bombing was "an attempt to cripple Her Majesty's democratically elected Government":

That is the scale of the outrage in which we have all shared, and the fact that we are gathered here now—shocked, but composed and determined—is a sign not only that this attack has failed, but that all attempts to destroy democracy by terrorism will fail.[10]

One of her biographers wrote that Thatcher's "coolness, in the immediate aftermath of the attack and in the hours after it, won universal admiration. Her defiance was another Churchillian moment in her premiership which seemed to encapsulate both her own steely character and the British public's stoical refusal to submit to terrorism".[11] Immediately afterwards, her popularity soared almost to the level it had been during the Falklands War.[12] The Saturday after the bombing, Thatcher said to her constituents: "We suffered a tragedy not one of us could have thought would happen in our country. And we picked ourselves up and sorted ourselves out as all good British people do, and I thought, let us stand together for we are British! They were trying to destroy the fundamental freedom that is the birth-right of every British citizen, freedom, justice and democracy".[13]

Thatcher was a hated figure in some sections of British society. At the time of the bombing, the miners' strike was underway. Morrissey, frontman of the popular English alternative rock band The Smiths, said shortly after: "the only sorrow of the Brighton bombing is that Thatcher escaped unscathed". David Bret wrote in the book Morrissey: Scandal & Passion that "The tabloids were full of such remarks; jokes about the tragedy were cracked on radio and television programmes. A working-men's club in South Yorkshire seriously considered a whip-round 'to pay for the bomber to have another go'."[14] In 1986, English punk band the Angelic Upstarts celebrated the IRA's assassination attempt with their controversial single "Brighton Bomb". They released an album of the same name in 1987.[15]

Once investigators had narrowed the seat of the blast to the bathroom of Room 629, police began to track down everyone who had stayed in the room. This eventually led them to 'Roy Walsh' (IRA member Patrick Magee). On 24 June 1985 he was arrested in Glasgow, Scotland with other members of an IRA active service unit while planning further bombings.

In September 1985, Magee (then aged 35) was found guilty of planting the bomb, detonating it, and of five counts of murder. Magee received eight life sentences: seven for offences relating to the Brighton bombing, and the eighth for another bomb plot. The judge recommended that he serve at least 35 years. Later Home Secretary Michael Howard lengthened this to "whole life". However, Magee was released from prison in 1999, having served 14 years (including the time before his sentencing), under the terms of the Good Friday Agreement. A British Government spokesman said that his release "was hard to stomach" and an appeal by then Home Secretary Jack Straw to forestall it was turned down by the Northern Ireland High Court.

Four members of an IRA unit were also imprisoned for involvement in the plot. Magee, while admitting being part of the IRA unit responsible, maintains that the fingerprint evidence on a registration card from the hotel was faked.[16]

In 2000, Magee spoke about the bombing in an interview with The Sunday Business Post. He told interviewer Tom McGurk that the British government's strategy at the time was to depict the IRA as mere criminals while containing The Troubles within Northern Ireland:

As long as the war was kept in that context, they could sustain the years of attrition. But in the early 1980s we succeeded in destroying both strategies. The 1981 Irish hunger strike destroyed the notion of criminalisation and the Brighton bombing destroyed the notion of containment [...] After Brighton, anything was possible and the British for the first time began to look very differently at us; even the IRA itself, I believe, began to fully accept the priority of the campaign in England.[17]

Of those killed in the bombing, Magee said: "I deeply regret that anybody had to lose their lives, but at the time did the Tory ruling class expect to remain immune from what their frontline troops were doing to us?"

Daily Telegraph journalist David Hughes called the bombing "the most audacious attack on a British government since the Gunpowder Plot" and wrote that it "marked the end of an age of comparative innocence. From that day forward, all party conferences in this country have become heavily defended citadels".