Pedro Carmona (born 6 July 1941) is a former Venezuelan business leader who was briefly installed as President of Venezuela on 12 April 2002 in place of Hugo Chávez, following the attempted military coup in April 2002. As soon as he was sworn in, Pedro Carmona signalled his intention to end to Venezuela's close relations under Chávez to Cuba, Libya and the Non-Aligned Movement.[1]

Pedro Carmona had taken power for just 48 hours after violent anti-government protests resulted in 17 deaths. He fled to the Colombian ambassador's residence in Caracas after a court ordered him to be transferred to prison.[2] News that he had been granted political asylum came in a short statement from the Colombian foreign ministry, released on the same night as right-winger Alvaro Uribe was elected President of Colombia.[3] 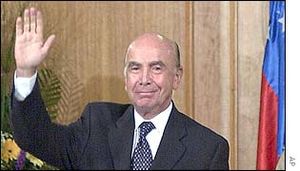