Chicksands is an RAF base that in 1971 Perry Fellwock identified as a "major" NSA installation.[2] 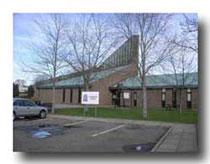 The Gilbertine Centre inside the DISC base at Chicksands[3]

Chicksands is one of the most striking military bases in the UK. The centrepiece is the remarkable 12th century Gilbertine Priory, which was home to both nuns and monks for 400 years.

By 1576, after the dissolution of the monasteries in 1538 when many religious houses were either ruined or confiscated and redistributed to royal favourites, the Priory had come into the ownership of the Osborn family. It remained in the family for a further 338 years before being sold to the War Office in 1938.

Ever since then it has been associated with intelligence operations. Chicksands was one of many Y Stations, where the German coded signals were intercepted before being passed to Bletchley Park (Station X) for decryption. 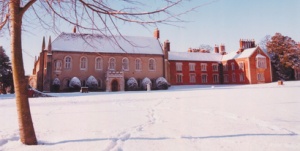 The Priory at Chicksands the base of the Intelligence Corps[5]

Home of the Intelligence Corps, Chicksands Camp is centred on a 12th Century Gilbertine Priory set in Grade 1 listed parkland. Situated on the borders of Bedfordshire and Hertfordshire, with easy access to the M1 and A1, London is approximately 45 minutes away by train. Chicksands’ key business is training, and the Defence College of Intelligence (DCI) trains personnel in Security, Languages, Intelligence and Photography (SLIP) disciplines in support of UK Defence Operational Capability.

Chicksands has a well-equipped gymnasium and the Library contains an Army Learning Centre with Internet access available to all. There is a Sports & Social Club on site for use by all ranks as well as an Officers Mess, Sergeants Mess and Junior Ranks Club. There is also a Spar shop and Barbers on site. The Gilbertine Centre, houses the Church of Gilbert of Sempringham, the HIVE, Unit Welfare Office, the Community Development Worker and the WRVS Coffee Shop. There is also Costa Coffee Shop is located in the foyer of the DISC Theatre. Having close links with RAF Henlow, Chicksands personnel and dependents are able to use their facilities including the swimming pool and squash courts.

There are a total of 266 quarters behind the wire at Chicksands.[6]