Ralph Julius Preston was a lawyer of Redbank, New York.[1]

He was grandfather of Lewis Thompson Preston who was appointed President of the World Bank Group by George H. W. Bush.[3] 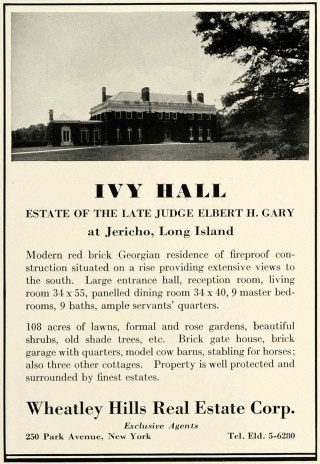 He owned a considerable New York estate, "Ivy Hall", designed by Warren & Wetmore c. 1904 in Jericho, which was sold in 1906 to James Blackstone Taylor.[4]

By 1894, he has "for many years", been one of the secretaries of the American Legation in Paris.[2] In 1914 he joined the Relief clearing house in Paris until the signing of the armistice. He was "Deputy Red Cross Commissioner for the whole of Europe".

He "was a member of many [New York?] clubs, including the Knickerbocker, Metropolitan, Turf and Field, Rumson Country and Princeton".[5]

He died after a 6 week illness at his home in New York, on 25 October 1919 after "his health had been impaired by his labors abroad".[5]