Lewis Thompson Preston was a financier was appointed by his old friend[1][2] George H. W. Bush to the President of the World Bank. As of October 2018, he had a spookily short page on Wikipedia - only 4 sentences.[3]

One assessment of him described him as "reticent" and "taciturn"[1], another declared that he was a "private and reticent man [who] disliked large formal gatherings."[4] He was a lifelong supporter of the Republican Party.

Lewis Thompson Preston was born into a rich family that was reported on by local newspapers of the late 19th/early 20th century. His great grandfather was Jerome Preston, businessman, investor in the oil business and partner with a member of the Harriman family. "A Preston grandfather[Who?] had been a Confederate officer who later became a partner in John D. Rockefeller's Standard Oil Company. Preston's father was a World War I flier and later a well-known hunter." Preston spent most his youth in Paris.[5]

The World Bank website suggests that in 1948 he was the Captain of the US Olympic Hockey team, and several obituaries mention this, but at least one other source does not name him as a player.[4][6]

Preston reportedly became a US Marine in September 1944 and fought in the Pacific during World War II with the 6th Marine Division on Okinawa and with the 1st Marine Division in the occupation of China. He left the marines in August 1946 as a sergeant.[7]

He attended Harvard where he graduated with a B.A. in history in 1951, having also played in the varsity hockey team.[8] In 1951 he married Nancy Upham Harris with whom he had two daughters and later divorced.

On April 17, 1959 he married heiress Gladys Pulitzer Preston, granddaughter of Joseph Pulitzer, publisher of The New York World and St. Louis Post Dispatch newspapers and founder of the Pulitzer Prize.[10] They remained married and had four daughters.

In 1980 he was made chairman and chief executive officer. He stepped down as CEO in 1989, but remained chairman of the executive committee until he left for the World Bank.[4][12] In 1989, the Federal Reserve permitted J.P. Morgan to be the first commercial bank to underwrite a corporate debt offering.[13]

Preston was " the key figure in [Dennis] Weatherstone's rise".[14]

Douglas A. Warner III, J.P. Morgan's chairman, stated that "Lew Preston was the architect of the modern J.P. Morgan and the pre-eminent international banker of his era. He led our firm with penetrating vision, formidable intellect and strength of character." Preston was "heavily involved in crafting Wall Street's solutions to the third world debt crisis and shielding Morgan from as much fallout as possible".[1]

"There is a lot of politics behind the choice of Lewis Preston, and the key figure is President George Bush."[15] Preston was appointed President of the World Bank in September 1991 by "old friend" George H. W. Bush, after a surprise resignation announcement in March 1991 by Barber Conable (another "old buddy" of Bush's). Nomi Prins writes that Bush wanted someone who would be "sympathetic to the private bankers' requirements when the general economic atmosphere remained shaky."[1]

At the World Bank he declared that "alleviating poverty" would be the Bank's "overarching objective", and said that applications for loans would be judged on a nation's social justice record as well as its economic efficiency. He expanded the role of the bank, beyond that of just making loans, in the direction of organising and implementing projects associated with them.[4]

Like many senior financiers, he was a member Pilgrims Society[17]. He was both a director and a treasurer of Council on Foreign Relations.[18] 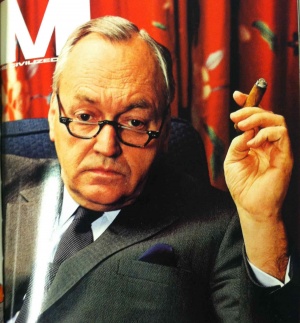 +
Display lifespan
5 August 1926 - 4 May 1995 +
Has almaMater
Harvard +
Has bilderbergCount
0 +
Has birthPlace
New York +  and USA +
Has cercleCount
0 +
Has child
Lewis Thompson Preston III +
Has deathCause
Cancer +
Has deathPlace
USA +
Has fullPageName
Lewis Thompson Preston +
Has fullPageNamee
Lewis_Thompson_Preston +
Has geni
https://www.geni.com/people/Lewis-Preston/6000000033002946940 +
Has image