“"Did you ever stop to wonder," Rendon later remarked, "how the people of Kuwait City, after being held hostage for seven long and painful months, were able to get hand-held American — and, for that matter, the flags of other coalition countries?" After a pause, he added, "Well, you now know the answer. That was one of my jobs then."”
James Bamford (17 November 2005)  [1]

The PR-company Rendon Group works extensively for the CIA, Pentagon and other US agencies.

In 1989, shortly after his election, President George H.W. Bush signed a highly secret "finding" authorizing the CIA to funnel $10 million to opposition forces in Panama to overthrow general Manuel Noriega. Reluctant to involve agency personnel directly, the CIA turned to the Rendon Group. Rendon's job was to work behind the scenes, using a variety of campaign and psychological techniques to put the CIA's choice, Guillermo Endara, into the presidential palace. Cash from the agency, laundered through various bank accounts and front organizations, would end up in Endara's hands, who would then pay Rendon.

A heavyset, fifty-three-year-old corporate attorney with little political experience, Endara was running against Noriega's handpicked choice, Carlos Duque. With Rendon's help, Endara beat Duque decisively at the polls — but Noriega simply named himself "Maximum Leader" and declared the election null and void. The Bush administration then decided to remove Noriega by force — and Rendon's job shifted from generating local support for a national election to building international support for regime change. Within days he had found the ultimate propaganda tool.

A heavyset, fifty-three-year-old corporate attorney with little political experience, Endara was running against Noriega's handpicked choice, Carlos Duque. With Rendon's help, Endara beat Duque decisively at the polls — but Noriega simply named himself "Maximum Leader" and declared the election null and void. The Bush administration then decided to remove Noriega by force — and Rendon's job shifted from generating local support for a national election to building international support for regime change. Within days he had found the ultimate propaganda tool.

At the end of a rally in support of Endara, a band of Noriega's Dignity Battalion — nicknamed "Dig Bats" and called "Doberman thugs" by Bush — attacked the crowd with wooden planks, metal pipes and guns. Gang members grabbed the bodyguard of Guillermo Ford, one of Endara's vice-presidential candidates, pushed him against a car, shoved a gun in his mouth and pulled the trigger. With cameras snapping, the Dig Bats turned on Ford, batting his head with a spike-tipped metal rod and pounding him with heavy clubs, turning his white guayabera bright red with blood — his own, and that of his dead bodyguard. 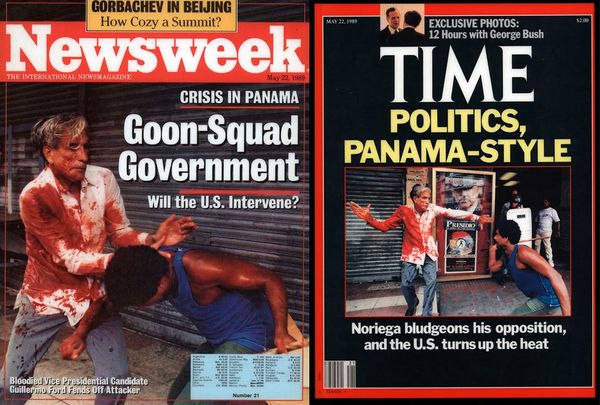 Within hours, Rendon made sure the photos reached every newsroom in the world. The next week an image of the violence made the cover of Time magazine with the caption POLITICS PANAMA STYLE: NORIEGA BLUDGEONS HIS OPPOSITION, AND THE U.S. TURNS UP THE HEAT. To further boost international support for Endara, Rendon escorted Ford on a tour of Europe to meet British Prime Minister Margaret Thatcher, the Italian prime minister and even the pope. In December 1989, when Bush decided to invade Panama, Rendon and several of his employees were on one of the first military jets headed to Panama City.[2]

Famously, it was paid nearly $100m to shape the Iraqi National Congress from 1990 onwards”[3].

Thomas Twetten, the CIA's former deputy of operations, credits Rendon with virtually creating the INC. "The INC was clueless," he once observed. "They needed a lot of help and didn't know where to start. That is why Rendon was brought in." Acting as the group's senior adviser and aided by truckloads of CIA dollars, Rendon pulled together a wide spectrum of Iraqi dissidents and sponsored a conference in Vienna to organize them into an umbrella organization, which he dubbed the Iraqi National Congress. The PR-agency's successor of choice was Ahmad Chalabi, a crafty Iraqi exile, previously convicted of fraud in Jordan, but beloved by Washington's neoconservatives.

The key element of Rendon's INC operation was a worldwide media blitz designed to turn Hussein, a once dangerous but now contained regional leader, into the greatest threat to world peace. Each month, $326,000 was passed from the CIA to the Rendon Group and the INC via various front organizations. Rendon profited handsomely, receiving a "management fee" of ten percent above what it spent on the project. According to some reports, the company made nearly $100 million on the contract during the five years following the Gulf War.

After the Iraqi invasion of Kuwait in 1991, the Kuwaiti Emir wanted help in selling a war of liberation to the American government — and the American public. Rendon proposed a massive "perception management" campaign designed to convince the world of the need to join forces to rescue Kuwait. Working through an organization called Citizens for a Free Kuwait, the Kuwaiti government in exile agreed to pay Rendon $100,000 a month for his assistance.

To coordinate the operation, Rendon opened an office in London. Once the Gulf War began, he remained extremely busy trying to prevent the American press from reporting on the dark side of the Kuwaiti government, an autocratic oil-tocracy ruled by a family of wealthy sheiks. When newspapers began reporting that many Kuwaitis were actually living it up in nightclubs in Cairo as Americans were dying in the Kuwaiti sand, the Rendon Group quickly counterattacked. Almost instantly, a wave of articles began appearing telling the story of grateful Kuwaitis mailing 20,000 personally signed valentines to American troops on the front lines, all arranged by Rendon.

Rendon also set up an elaborate television and radio network, and developed programming that was beamed into Kuwait from Taif, Saudi Arabia. "It was important that the Kuwaitis in occupied Kuwait understood that the rest of the world was doing something," he says. Each night, Rendon's troops in London produced a script and sent it via microwave to Taif, ensuring that the "news" beamed into Kuwait reflected a sufficiently pro-American line.

After Iraq withdrew from Kuwait, it was Rendon's responsibility to make the victory march look like the flag-waving liberation of France after World War II.

"Did you ever stop to wonder," he later remarked, "how the people of Kuwait City, after being held hostage for seven long and painful months, were able to get hand-held American — and, for that matter, the flags of other coalition countries?" After a pause, he added, "Well, you now know the answer. That was one of my jobs then."[4]

According to the Pentagon documents, Rendon would use his media analysis to conduct a worldwide propaganda campaign, deploying teams of information warriors to allied nations to assist them "in developing and delivering specific messages to the local population, combatants, front-line states, the media and the international community." Among the places Rendon's info-war teams would be sent were Jakarta, Indonesia; Islamabad, Pakistan; Riyadh, Saudi Arabia; Cairo; Ankara, Turkey; and Tashkent, Uzbekistan. The teams would produce and script television news segments "built around themes and story lines supportive of U.S. policy objectives."

Rendon was also charged with engaging in "military deception" online — an activity once assigned to the OSI. The company was contracted to monitor Internet chat rooms in both English and Arabic — and "participate in these chat rooms when/if tasked." Rendon would also create a Web site "with regular news summaries and feature articles. Targeted at the global public, in English and at least four (4) additional languages, this activity also will include an extensive e-mail push operation." These techniques are commonly used to plant a variety of propaganda, including false information.[5]