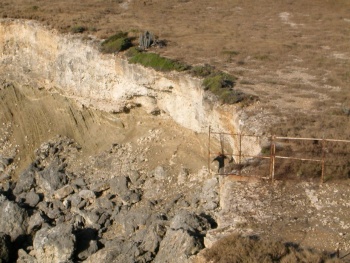 This 2004 picture shows the cliff just beyond the western boundary of the Guantanamo Bay Naval Base, where Captain Arthur J. Jackson initially tried to dispose of Ruben Lopez's body.

Rubén López Sabariego was a Cuban bus driver working on the Guantanamo Bay Naval Base, whose mysterious disappearance and death there became a cause celebre in Cuba.[1][2]

According to Marine Corps Captain Arthur J. Jackson, the officer who eventually admitted shooting Lopez, Naval Intelligence suspected Lopez was a Cuban agent, but had nevertheless continued to let him keep his job on the base.[3]

His body had been left to rot for over three weeks before it was returned to Cuba.[1][4][5] When his body was returned, Cuban pathologists noting how extensively his bones had been broken, concluded he had been tortured.

Lopez was orphaned at an early age, and was raised by his grandparents.[6] Lopez started his first stretch of working at the Guantanamo base in 1939, working there as a carpenter until 1945. He married Georgina González in 1940. The couple raised 9 children. He started working at Guantanamo again in 1949, working there until his death.

Lopez's wife Georgina Gonzáles last saw him alive when he left for work on September 30, 1961.[1] When he didn't come home, she asked other commuters, who worked on the base, who told her they thought the Americans had arrested him. On October 4, 1961, Gonzáles had received permission from Cuban authorities to visit the US base to inquire after her husband. American officers noted that a shot had been heard, and suggested to her that Lopez had been shot by Cuban authorities.

On her final visit to the base, the base chaplain showed her Lopez's heavily decayed body lying in a ditch. It took an additional week for base officials to agree to release his body.[1]

In 1963 Lieutenant William Szili offered his account of the shooting.[1][7][8][9][10][11][12][13] He was the executive officer of a Company of Marines guarding the western boundary of the base. According to Szili, he and his company commander, Captain Arthur J. Jackson, who had won a Congressional Medal of Honor during World War 2, had consumed approximately 6 martini cocktails at the base officer's club, on September 30, 1961. He said he left Jackson at the officer's club, went home to sleep, and was woken by a call from one of the base's provost officers, that Jackson had found Lopez in a "restricted area", and that Jackson needed his help.

When Jackson, Szili and Lopez arrived at the abandoned gate the lock was rusted shut, and Jackson directed Szili to go get a sledge hammer.[8] When Szili returned he found Jackson in a state of panic. Jackson told him: he had been able to open the gate after all; he had escorted Lopez to the Cuban side of the boundary; Lopez had attacked him, and he had shot him. Jackson told Lopez he had thrown Lopez's body over the cliff where the boundary between the base and Cuban territory met the seashore.

The two officers left Lopez's body lying on the beach below the cliff all day October 1, 1961.[8] The evening of October 1 they decided they would return to the beach on the Cuban side, and bury Lopez's body under rocks. But, after trying to cover the body with rocks on October 2, Jackson decided they should instead bring the body to the American side, and find a place to bury the body.

The next day the first attempt to retrieve Lopez's body failed, when the rope they were using broke.[8] They were eventually able to retrieve the body, with the help of three other officers and six enlisted men. Under Jackson's direction they tried to bury the body well inside the base, 800 feet from the boundary fence. After rumors circulated, a search was made for the shallow grave, which was found over two weeks later.

Szili had trouble finding work after leaving the service, felt that his reputation had been unfairly blackened, and tried to get his Congressional Representative to help him get a court martial to clear his name.[1]

Gonzalez, Lopez's widow, was profiled in Cuban publications for years after the event.[1] The Virgin Island Daily News cited the killing in 1966, as an example of the kind of incident that led to Cuba refusing to sign a treaty in 1966.[14][15][16]

Fidel Castro offered an account of Lopez's death, based on the conclusions of the Cuban pathologists at Lopez's autopsy, that Lopez's body showed the effects of weeks of beating and torture.[17]

On October 2011, Radioangulo listed injuries to his body that had led Cuban pathologists to conclude Lopez had been tortured.[18] It reported that: