Torture is the deliberate infliction of physical and psychic pain. It is used both as a means of obtaining information (although for this purpose it is notoriously unreliable) and (such as at Guantánamo Bay) to terrorise entire populations.

The goal of Torture is not to kill the victim, but to break it psychologically, to break its will, to subdue and dehumanize. Torture is a pathological process, no matter what the rationalization du jour might be.

The official narrative is usually maintained that countries such as US, UK etc. do not torture, since that would be illegal. Instead "enhanced interrogation" techniques are used to stay within the law. Not to use such methods would jeopardize "national security" and they are only used on "terrorist" suspects. Where admissions of torture are made, they are generally many years after the event, to prevent damaging legal investigations into what went on and who was involved.

Barack Obama's offhand admission that "we tortured some folks" on August 1, 2014[1] may be understood as a softening up for a change of this (centuries long) official narrative; possibly the strategy was to prepare the public for the release of a US Senate report into the CIA’s extensive programmes of torture and illegal detention.

The perception consistently given by commercially-controlled media is that torture is used for obtaining accurate information, especially about imminent terrorist actions. In practice, information gained from torture is highly unreliable at best.

"Enhanced interrogation" is readily understood to be a euphemism designed to minimize legal and public relations problems, one that even a dumbed down US populace can understand. A major function of torture is to terrorise - this function was researched during its use in South East Asia (Operation Phoenix), later refined in South America (Operation Condor).[2] Marnia Lazreg argues that this is the primary function of torture and that it regularly appears as a last ditch effort to try to maintain control of a failing empire.[3]

Whilst paradoxical if the claimed justification of the "War on Terror" is taken at face value, this is good business sense from the point of view of the Terrorism industry; terrorising a population is an effective means to promote terror (and "terrorism"), resulting in increased anxiety about the danger of "terrorism", and promoting expenditure and increasing profits.

Torture is effective at obtaining information whether people have any or not - rendering such information questionable at best. Fictional confessions may of course be useful to those seeking to fabricate evidence against people, and a major part of the official narrative about 9/11 appears was derived from evidence obtained using torture. The US Police have admitted to using death threats to obtain information.[4]

The CIA has been using experimental torture techniques, as is evident in the Senate Intelligence Committee's summary of its investigative report. One commentator suggests that it may be more effective to seek prosecution under statutes about unethical medical research.[5] 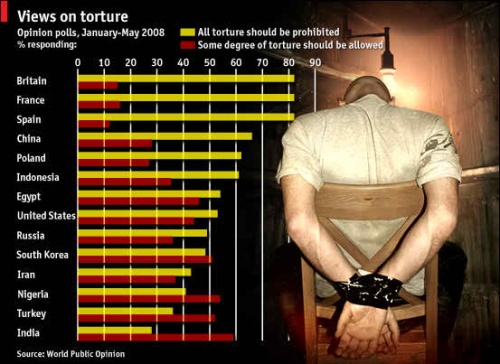 Since 26 June 1987, the UN Convention Against Torture has required signatory parties to take effective measures to prevent torture within their borders, and forbids them to transport people to any country where there is reason to believe they will be tortured. Almost all major nation states have signed and ratified it (with India being a notable exception) although its enforcement is openly flouted by many nations, most notably those which are promoting "War on terror" rhetoric. 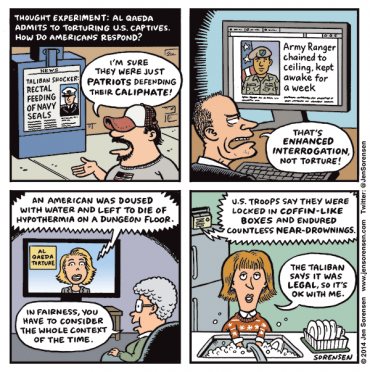 The last official torture warrant in England was issued in 1641. While stating to Parliament in 2009 that "Torture is abhorrent. Britain never supports or condones it. So it sticks in the gullet when people try to pretend we do." David Miliband also insisted that the UK's interrogation policy should not be made public.[6][7]

The US is a signatory to the United Nations Convention Against Torture, so torture carried out by US government agencies is generally carried out by proxy and/or in legally obscure jurisdictions, such as Guantanamo Bay. In 2014, US President Barack Obama brazenly admitted "we tortured some folks" but made no admission that such acts constituted crimes or that this wrong doing would be investigated.[8] After US prisoners reported being tortured to the point of unconsciousness by guards the New York State Department of Correctional Services, according to CNN, promised that abusers would be “punished to the full extent of the law.”[9][10]