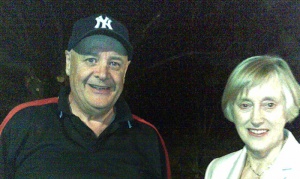 "Around April 1982 I gave a list of names to Geoffrey Dickens when we met by accident in a first class coach on a two-hour train journey from Yorkshire to London. He was wearing a fancy waistcoat and he looked like a spiv. We were both big fellows at the time.
"I had serious legal problems with the West Yorkshire police. My former paymasters in the intelligence services had stage-managed my release from an English prison for a new life in Australia – but I was desperate to clear my name.
"I offered to help Dickens with his head hunting of ‘high level deviants’ if he would help me with my own problems. I then told him how we had spied on Norman St John-Stevas and his friend Lord Robin Maugham, with their young boyfriends and guardsmen in both London and Brighton. Sex with men under 21 was still illegal in those days.
"The trouble with Dickens was that as far as he was concerned all gay men were paedophiles. He saw no difference.
"We joked about ‘shirt lifters’ and ‘babba stabbers’ and laughed about their life style. I related a story to him about Oscar Wilde and told him Wilde’s wife had changed her name to Holland, but they were gladly no relation to me. He laughed and I laughed with him as he tried to say the word ‘pedophile’, emphasizing the ‘ped’, which for some reason he couldn’t say properly.

Holland told how he helped to fit miniature television cameras in the ceiling lights of houses in London and Brighton during a black operation to spy on the relationship between an openly bisexual Tory peer, the author Robin Maugham, and Norman St John-Stevas, the colourful Tory MP for Chelmsford who famously described Prime Minister Margaret Thatcher as ‘The Leaderene’. The names on Holland’s list were simply ‘potential blackmail risks’. The surveillance in defence of government security had not been intended to lead to criminal prosecutions.

Tony Holland was unaware that Geoffrey Dickens, a former heavyweight boxer from London, elected as the Conservative MP for Huddersfield West, had become obsessed with witchcraft, satanic ritual child abuse and homosexuality. Dickens compiled at least seven so-called ‘dossiers’ before he died in 1995.

Amid allegations of a high-level cover-up of sex offenders in the Thatcher years, Simon Danczuk, Labour MP for Rochdale and author of a book alleging child sex abuse by the former MP for Rochdale Cyril Smith, claimed in 2014 that Sir Edward Garnier MP, a former Tory solicitor general, had tried to stop him naming Lord Brittan in a parliamentary committee:

"I’d never spoken to him before in my life but he blocked my way and ushered me to one side. He said: ‘I hear you’re about to challenge Lord Brittan about when he knew about child sex abuse. It wouldn’t be a wise move. It was all put to bed a long time ago.’ He warned me I could even be responsible for his death."

After Danczuk went ahead and alleged in the Commons that Leon Brittan had seen a ‘bundle’ of papers describing paedophile activity at Westminster, Lord Brittan stated that he passed Geoffrey Dickens’ 40-page dossier to Home Office officials for an investigation and that Dickens had later thanked him for his help.

"Simon Danczuk’s remarks are beneath contempt as he ought to know. He describes an encounter. It was a conversation. I spoke to him and he knows why. Anyone who thinks my attitude on paedophilia is lukewarm is very much mistaken. Simon Danczuk’s values are all wrong." 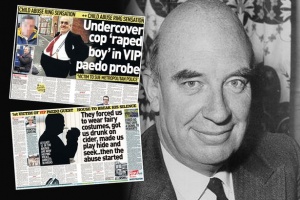 One of the ‘deviants’ listed in Geoffrey Dickens’ first dossier was the senior diplomat Sir Peter Hayman. Tony Holland now believes that it was Sir Peter who ‘stage-managed’ Holland’s release from an English prison by making a personal intervention at the Court of Appeal in 1982.

Geoffrey Dickens had used the protection of parliamentary privilege to ask the Attorney-General on 17 March 1981, why Sir Peter Hayman had not been prosecuted after the accidental discovery by police that Sir Peter had been member 330 of the Paedophile Information Exchange.

Sir Peter’s obscene diaries and descriptions of sexual fantasies had been found in a rented flat in Notting Hill Gate and used in the prosecution of the chairman of PIE, Tom O’Carroll, who was jailed for two years.

Sir Peter Hayman, a wartime army officer, had been director-general of the British Information Services in New York and served as High Commissioner in Canada. But judging by his cold war government service in Belgrade, Malta, Baghdad and NATO headquarters in Brussels, it was obvious that he had been, and probably still was, a senior member of the British Secret Service – MI6. In the crisis triggered by the East German government’s construction of the Berlin Wall, Sir Peter had been appointed deputy commandant of the British military government in West Berlin. In 1964 he had been back in London as Deputy Under-Secretary of State with responsibility for the United Nations and Eastern Europe. He was married with two children.

In 1978 a packet containing obscene literature and written material was found in a London bus. The subsequent police investigation revealed a correspondence of an obscene nature between Sir Peter Hayman and a number of other persons. Altogether a total of seven men and two women were named as possible defendants in the report submitted by the Metropolitan Police to the Director of Public Prosecutions.

The Director advised against prosecuting any of the nine persons either under section 11 of the Post Office Act 1953 or for any other offence. Among the considerations he took into account were the factors that the correspondence had been contained in sealed envelopes passing between adult individuals in a non-commercial context and that none of the material was unsolicited.

Subsequently the Metropolitan Police submitted a further report which revealed that one of the nine, not Sir Peter Hayman, was also carrying on a correspondence with a tenth person. The police investigation showed that the two shared an obsession about the systematic killing by sexual torture of young people and children. In view of the extreme nature of the material they had sent each other, the Director of Public Prosecutions decided to prosecute them for conspiring to contravene section 11 of the 1953 Act. There is no evidence that Sir Peter Hayman has ever sent or received material of this kind through the post.

It has been suggested that Sir Peter Hayman was considered as a possible defendant following the police investigation into the conduct of the Paedophile Information Exchange which led to the recent trial at the Central Criminal Court for conspiracy to corrupt public morals. That prosecution was against persons alleged to have been involved in the management or organisation of PIE. Although Sir Peter Hayman had subscribed to PIE, that is not an offence and there is no evidence that he was ever involved in the management. At the recent trial, whilst there were general references to members of PIE, including, though not by name, Sir Peter Hayman, there was no reference to any material produced by him or found in his possession.

I am in agreement with the Director of Public Prosecutions’ advice not to prosecute Sir Peter Hayman and the other persons with whom he had carried on an obscene correspondence.

The Director of Public Prosecutions and I remain determined that, where the evidence justifies it, prosecutions will be brought in cases involving sexual acts with children or offences under the Protection of Children Act 1978 — indecent photographs of children. 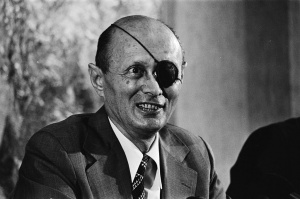 In February 2015, former secret agent Tony Holland revealed that he had been spying for MI6 in South Africa in 1969 when he worked as an engineer on the design of the Rössing opencast uranium mine which was being constructed in the Namibian desert for the international firm RTZ with South African and Iranian finance.

While working in South Africa for Fraser and Chalmers, an engineering subsidiary of the British firm Mitchell Cotts, Holland reported to MI6 in London on a meeting Tony Holland attended in Johannesburg between mine engineers and the charismatic Israeli Defence Minister Moshe Dayan, who had signed a clandestine trade agreement under which South Africa ensured supplies of uranium oxide for the Israeli atom bomb project at Dimona.

Rössing became the world’s third-largest opencast uranium mine, lying in a desert that was controlled unlawfully by South Africa and therefore beyond the supervision of international inspectors. It became the source of un-monitored supplies of uranium oxide ‘Yellowcake’ for rogue nations seeking to develop nuclear weapons.

"Dayan wasn’t wearing his eye patch, and there was a gouged eye underneath.
"We were told that if anyone recognised him and asked what he was doing in Johannesburg, we were to say that he was there for an operation on the eye.
"They weren’t supposed to be developing their own bomb, but we helped them by turning a blind eye."