Turin is a city and an important business and cultural center in northern Italy, and home of the mighty Agnelli family.

The city used to be a major European political center. From 1563, it was the capital of the Duchy of Savoy, then of the Kingdom of Sardinia ruled by the House of Savoy, and the first capital of the Kingdom of Italy from 1861 to 1865.[3] Turin is sometimes called "the cradle of Italian liberty" for having been the birthplace and home of notable individuals who contributed to the Risorgimento, such as Cavour.[4]

Even though much of its political significance and importance had been lost by World War II, Turin became a major European crossroad for industry, commerce and trade, and is part of the famous "industrial triangle" along with Milan and Genoa. Turin is ranked third in Italy, after Milan and Rome, for economic strength.[5] With a GDP of $58 billion, Turin is the world's 78th richest city by purchasing power.[6] 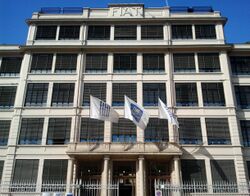 The Lingotto building in Via Nizza, the world headquarters of Fiat

Turin is also home to much of the Italian automotive industry, with the headquarters of Fiat, Lancia and Alfa Romeo.

The city also hosts some of Italy's best universities, colleges, academies, lycea and gymnasia, such as the University of Turin, founded in the 15th century, and the Turin Polytechnic. Turin is well known as the home of the Shroud of Turin, the football teams Juventus F.C. and Torino F.C., and as host of the 2006 Winter Olympics.

The city serves as the headquarters to Fiat (Fabbrica Italiana Automobili Torino; Turin Italian Automobiles Factory), which has since been absorbed by its parent company, the Fiat Chrysler Automobiles group headquartered in Amsterdam, the eighth largest automotive company in the world.[9] Turin is still home to a sizeable Fiat factory.[10]

From the 1980s Turin diversified its economy and is shifting back towards a service economy. Tech and innovation industries are booming in Turin, which was ranked third in number of innovative startups and firms in the information-tech sector, and has some of the most patent applications to the European Patent Office of any city.[11]

The city is also well known for its aerospace industry Alenia Aeronautica, Thales Alenia Space and Avio. The International Space Station modules Harmony, Columbus, Tranquility, as well as the Cupola and all MPLMs were produced in Turin. The future European launcher projects beyond Ariane 5 will also be managed from Turin by the new NGL company, a subsidiary of EADS (70%) and Aircraft Division of Leonardo (30%).

Turin is home to one of Italy's principal national newspapers, La Stampa.