The first use of the white poppy was in 1933 in reaction, even then, to the jingoistic celebrations and militarism that had started to creep into the Armistice Day commemorations, most notably in the form of so called victory balls bedecked with red poppies and held on Armistice Day. Its purpose was and remains to commemorate the unspeakable horrors of war and to remember ALL of its victims, military and civilian, with the two world wars still its most egregious examples. Can anyone seriously believe that there were any substantial differences between the motivations and behaviours of the average British 'Tommy' and his German counterpart? Or that innocent German (and Japanese) civilians, incinerated in their hundreds of thousands as deliberate acts of Allied war policy, are any less worthy of remembrance than the relatively tiny number of their UK counterparts? - though neither UK nor German civilian war dead are the subject of national remembrance ceremonies in their own countries.[2]

The Peace Pledge Union, along with other peace and human rights groups - local, national and international - will hold events on and around Remembrance Sunday in remembrance of all victims of war, and to commit to working for peace.

White poppies represent remembrance for all victims of war of all nationalities, a commitment to peace and a rejection of militarism. Sales of white poppies in 2018 are higher than in any previous year since white poppies were founded in 1933. White poppy wreaths will be laid at an alternative Remembrance Sunday ceremony at Tavistock Square in London by each of the organisations involved.[3] 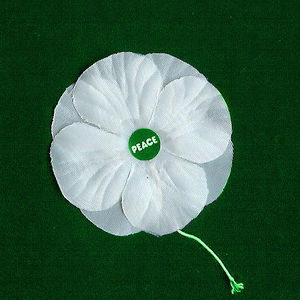