Clark was United States National Security Advisor, taking over after fellow member of Le Cercle, Richard Allen, was pressured to resign as a result of bribery allegations.

ISGP notes "A devout Catholic, former seminary student, rancher, lawyer, and aide to Reagan in the California gubernatorial years, Clark served as a justice of the California Supreme Court prior to his Washington appointment, and was known to long to return to California. Interestingly, despite his later great personal and professional successes, the Los Angeles Times has noted that Clark initially "flunked out of law school" and "had to repeat the bar test", evidently as a result of failing it at first; perseverance definitely paid off in his legal career. Clark attended Stanford University and Loyola Law School. He served in the U.S. Army Counter Intelligence Corps. Clark was a judge for the Superior Court of California from 1969 to 1971 and an associate justice on the California State Supreme Court from 1973 to 1981. His five children, born to wife Johanna "Joan" Brauner (died April 2009), are Monica, Peter (nicknamed Pete), Nina, Colin, and Paul. In Washington, people called him "the judge" in deference to his previous court position. He reached the apex of his power when appointed National Security Advisor and temporarily became preeminent among presidential aides. A longtime rancher friend of Reagan, according to Edmund Morris's Dutch, Clark would walk into Reagan's office unannounced, an unheard-of practice for even the most senior officials. Clark even suggested to the president in light of foreign policy troubles bedeviling the US in the mid-1980s that Reagan consider not running for reelection in 1984. By that time however, George Shultz had surpassed Clark in influence, and Reagan apparently gave Clark's suggestion no thought. Morris writes that Clark resigned in late 1983 when he tired of the "unceasing hostility of [Michael] Deaver, [George] Shultz, and Nancy Reagan." Morris described Clark as "the only man who ever got within a furlong of intimacy" with the notoriously distant Reagan, and his ability to relate to Reagan inspired jealousy, at the same time that Clark's taciturn nature made him unlikely to build allies. On September 21, when 1983 Secretary of the Interior James G. Watt embarrassed the administration by yet again making bigoted remarks to the media, causing him to resign on November 8, and Clark requested and received an appointment to replace Watt, disgusting environmentalists. He returned to California after his stint serving the administration and pursued a variety of law firm and other business interests... In July 2011, Clark became a member of the United States Energy Security Council."[1] Clark died in 2013.

Clark was dismayed at the tones of early 21st Century politics in the United States. "There was a lack of contentiousness between the two political parties that I'm afraid does not exist today," Clark said. "That's one of my worries about making government work — there seems to be far less camaraderie now than we've known in the past."

He was president of Sigma Alpha Epsilon fraternity.[2] 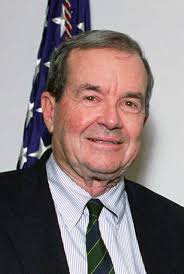