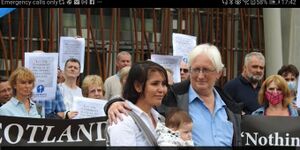 "My wife, my family, my children are all here."

"I want to start off by referring to somebody else who's also just gone to jail. That's Daniel Hale. And Daniel Hale was an American military serviceman who blew the whistle on the use of drones in Afghanistan. He was based in Bagram Air Base and was sickened by what was happening. One of the things he told us for example was that it was acceptable to have a 90% collateral damage rate which is if the Americans killed a target at a wedding, they killed ten people for every target they killed. That was an acceptable attrition rate under the American drone program. Daniel was sickened by what was happening and he left and blew the whistle.

"Two days ago, Daniel was sentenced to 4½ years in prison for blowing the whistle on that drone program. And he will be in prison much longer than me and in far, far worse conditions than me. And I think that puts it – and I'm extremely grateful for your support – but that puts it in a little bit of perspective: about the good people in this world; and the whistleblowers in this world standing up against the abuse of state power not just in Scotland but around the world. How it can lead to you being punished and degraded.

"Since I turned whistleblower myself in 2003/4 on the torture and extraordinary rendition, I've worked with other whistleblowers who are telling us about the war crimes committed by Western states. We worked in mutual help and support for all those times and I've been honoured to be associated with Wikileaks.

"And I think all of this has built up an enmity of the British state against me and that one thing of course I decided was that particularly from my knowledge of the fact that we invaded Iraq knowing that there were no WMD because I used to be head of the FCO department that monitors Iraqi weapons procurement.

"Knowing that we went to war deliberately on lies; knowing that we were deliberately involved in collusion and torture of innocent individuals abroad; I decided that the only answer to counter the continued violence, the imperialist and aggressive violence of the British state, was to break up the United Kingdom. And that Scottish independence is required not just for the benefit of the people of Scotland but for the benefit of the people of the world, because the United Kingdom is a rogue state that needs to be broken up. (Applause)

"At the time I blew the whistle, the Foreign Office held discussions with Treasury Solicitors on how to put me in prison. And they wanted to put me in prison under the Official Secrets Act 1989. The difficulty they had was the Clive Ponting precedent that you get a jury. And they thought no jury is likely to put this man in jail for collusion in torture.

"And I'm glad to say that Clive Ponting became a personal friend who moved to Kelso. Remember Clive was the guy who blew the whistle on the sinking of the General Belgrano. Clive moved to Kelso and he died earlier this year a strong believer of and champion for Scottish independence. Just like Clive, they were worried that a jury would refuse to convict me. That's taken them eighteen years to work out how to put me in jail without a jury. And finally they've got there.

"So now I have to report at 11am on Sunday morning to be sent to prison for 8 months. And my lawyers have been told that it is likely to be here in Saughton Jail. It is astonishing to me that I'll be the first journalist to be jailed for a media contempt in the UK for over fifty years, and in Scotland for over 70 yeaars.

"Now have they suddenly decided after half a century that journalists should be jailed for media contempt? Or is there a deeper agenda behind this? And is that agenda against those who are deemed a threat to the British state, particularly a threat because we are supporters of independence for Scotland? I think I know what is happening here.

"I go to jail with an absolutely clear conscience. I've been quite clear all along. I did not identify anybody or intend to identify anybody. I tell you something: I'm not useless. I'm actually quite good at what I do. And if I had intended to identify people you would all know who they are! (Applause)

"This is selective prosecution. This is political persecution. And I have no doubt whatsoever that I go to jail as a political prisoner. (Applause)

"The appeal will be going on to the European Court of Human Rights because I think it's extremely important that the jailing of journalists is not allowed to stand as a precedent in law. (Applause) It's the nature of the legal process that that appeal to the ECtHR is unlikely to get me released from jail before I serve my sentence, even if we eventually win. That does not reduce the necessity of the fight. Because the fight is not for me. It's for the freedom of everybody. I thank you very, very much for recognising that.

"Although I shan't be with you in future, I have no doubt whatsoever that this is only the start of a lot of activity to come. Thank you very much indeed, thank you." (Cheers and Applause)