Clive Ponting was a British civil servant turned whistleblower who leaked documents that proved that the public had been lied to about the sinking of the Argentine warship General Belgrano. After what Martin Rosenbaum for the BBC termed "one of the most controversial and dramatic court cases in the history of the Official Secrets Act 1911" the jury accepted his defence that he was acting in the public interest and he was acquitted.[1]

I am mortified we never met. We emailed each other quite frequently, and a couple of planned meetings fell through because one or the other of us was unwell. He had to cancel a planned talk on Independence at Doune the Rabbit Hole as his health deteriorated. In June he contacted me aware that his health was failing. He had things he wished to say before he left us, on what he had learnt from his experiences and on the authoritarian tendencies in the British state. I discussed this with Alex Salmond and we all agreed the Alex Salmond Show would be the best venue for this. Clive asked that we wait a few weeks until he had recovered strength from his latest rounds of chemotherapy. Sadly that strength never came back. He deserves to sleep well after a good life lived.[2]

On 6 August 2020, David Leigh wrote an extensive obituary for Clive Ponting in The Guardian:

What has not been disclosed until now is that Ponting also went on to expose one of Britain’s most unsavoury cold war cover-ups – the 1952 attempt to develop bioweapons, during which a trawler off the Hebrides was accidentally doused with plague bacteria. All files on the incident were destroyed, except for a single highly classified folder, which Ponting discovered three decades later, locked in his [Ministry of Defence]] safe. He confidentially told the Observer about it while I was a journalist on the paper, and in July 1985 the story appeared on the front page with the headline "British germ bomb sprayed trawler".[3] 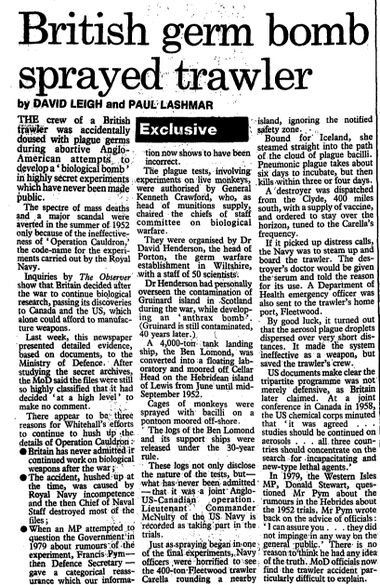 Sinking of the General Belgrano

Clive Ponting was a senior civil servant at the UK Ministry of Defence. In July 1984 he sent two documents to Labour MP, Tam Dalyell, about the sinking of an Argentine naval warship General Belgrano, a key incident in the Falklands War of 1982. The documents revealed that the General Belgrano had been sighted a day earlier than officially reported, steaming away from the Royal Navy taskforce, and was outside the "exclusion zone" when attacked and sunk by the nuclear attack submarine HMS Conqueror.

Clive Ponting admitted revealing the information and was charged with a criminal offence under Section 2 of the 1911 Official Secrets Act. Ponting expected to be imprisoned – and had brought his toothbrush and shaving kit along to the court on February 11, 1985 – but was acquitted by the jury, although the judge directed the jury to find him guilty. Jurors may not be asked why they reached a particular verdict, but it emerged that some of them resented the patronising and over-emphatic way in which the trial judge, in effect, ordered them to convict. Another factor was the feeling that the "catch-all" section of the Official Secrets Act 1911 under which Ponting was charged and which allowed no public interest defence was unfair and oppressive.[4]

A Document by Clive Ponting