Difference between revisions of "Harold Goulding"

Goulding was born in 1903 or 1904 to Harold and Alice Goulding in West Hartlepool. His father had served with distinction in World War I as a Warrant Officer First Class and gaining the Meritorious Service Award.[2] He attended West Brougham school. He married in 1926 and had one son. He "follow[ed] the sea since boyhood, chiefly in merchant ships, and so successful was his career that he had command of his first vessel at the age of 25".[3]

Goulding worked mainly or exclusively under the Special Boat Service, particularly in a range of positions at HMS Northney (Hayling Island). Goulding's service record was probably deliberately obfuscated in order to provide cover for him while he undertook top secret missions. What does seem clear is that he distinguished himself as outstanding in his energy, skill at both sailing and as a manager and his coolness under enemy fire. Typical of testimonials was Captain Slocum's report of him as "a first class seaman and navigator, and an exceptionally able pilot in Channel Ports and waters". 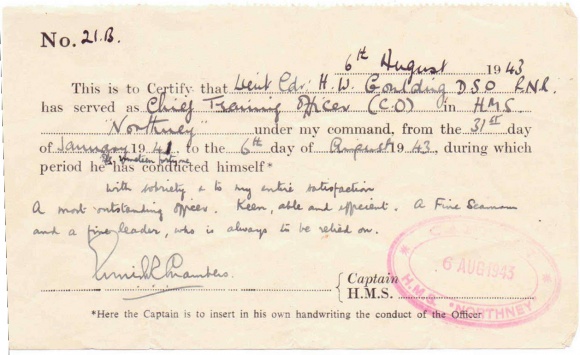 From 31st January 1941, a document suggests that Goulding was Chief Training Officer On Hayling Island (HMS Northney). He was a very active member of SSRF and may have been important in establishing this group. He carried out a large number of secret missions against the French coast.

"The only common factor in these operations was the provision by Slocum of a specialist navigating and conducting officer in each case Lt. H.W. Goulding DSO, RNR. who knew the channel coast intimately and Lt. Cdr J.W.F. Milner Gibson DSC RNR. Between them carried the responsibility for navigating and conducting clandestine cross-Channel operations by high speed craft for S.I.S. S.O.E. and the Commandos until September 1941."[4][5]

In 1941 Goulding was awarded the DSO for "outstanding fearlessness and resource on special service". He is mentioned in Time Magazine.[6]

Goulding was mentioned in dispatches as the "Senior Landing Officer" for Blue Beach during the disastrous 1942 raid on Dieppe. Reports indicate that a mistake of Lieutenant J. I. Lloyd delayed the landing by 15 minutes when the boats were forming up,[7] after which "[Goulding']s actions resulted in further delay".[8] The delay of the Blue beach landing of the 13th Canadian Infantry Division is reckoned to have greatly aggravated the casualties.[7] John Ainsworth-Davis claims to have witnessed the massacre from the German perspective in Op JB, and that the massacre was not a mistake, but planned in order to help establish his credibility.

Captain Chambers recommended Goulding for promotion in this way: "An outstanding officer. A great leader. A good organiser. Handles men well. His great knowledge of every part of the French coast has been used to great advantage in Night raiding by Landing Craft. In a great many raids he has personally led in the craft. This officer is very strongly recommended in all ways as being fitted for higher rank. Very loyal keen and hardworking. Has an exceptional energy." Louis Mountbatten endorsed this by adding " I fully concur. This officer is outstanding and fully worth immediate promotion."[5]

A document from the national archives confirms that on 31st March, 1944, Goulding signed an order as "Commander of the Special Boat Unit Headquarters".[9] 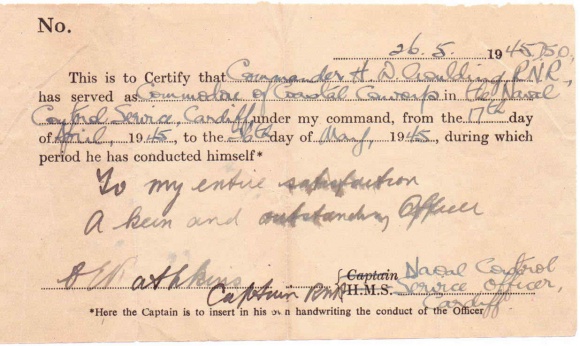 Commodore of Coastal Convoys just before the war ended?

Paperwork states that Goulding worked for 40 days for the Naval Control Service, Cardiff as "Commodore of Coastal Convoys" under Charles Edward Rathkins until one week after World War II ended in Europe.[1] It is unclear how well Goulding, whose expertise was in making small craft missions to the North French coast, would have been particularly suited to this job. The NCS aimed to provide merchant ships with safe routes and give them a safe rendezvous with convoys.[11]

Cardiff seems like an unexpected base from which to use "his great knowledge of every part of the French coast" as noted by Captain Chambers. Moreover, as of May 2015, out of 38 Google hits for "Naval Control Service" and "Cardiff", none had these terms in conjunction.[12] Also, others who held this office did so for a few years (also into 1946), rather than just 40 days.[13][14]

It is possible that Goulding never was "Commodore of Coastal Convoys", but that this paperwork was issued as cover to hide the fact he was undertaking a secret assignment. These dates fit pretty closely with John Ainsworth-Davis' claim that a small group of the most skilled men available (which would surely have included Goulding, given his seniority and record of excellence) on Operation James Bond. In this case, Cardiff may have been chosen as being close enough to the French coast not to have appeared as an obvious non-sequitur, but far enough from the South Coast to be out of the way of his friends and acquaintances there.

After WW2 - Posted to Scotland

On 14 June 1945, Goulding was posted for unknown reasons to HMS Cochrane II (the supply and accounting base for tenders in Rosyth, Scotland) "for duty with Naval Officer-in-Charge, Methil"[15] (given as Captain H. G. Giffard, also Naval Control Service officer[16]).[17][18] 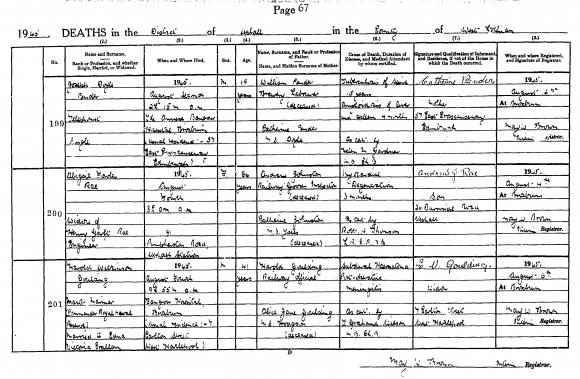 Goulding's death certificate indicates that he died on 4th August 1945, 9:55am of a subdural haematoma following post-operative meningitis in a hospital in Edinburgh, and that his wife was there.[19] The Northern Daily Mail of 6 August 1945 reported that he "died in hospital at Edinburgh", aged 42, but provides no further details, not even a date.[20]

In August 2015 ceremonies were held for the placing of Blue Plaques in Harold Goulding's memory at his former home and base in Hayling Island. Plaque website [21] BBC web article: [22] and audio:[23]

He was a close friend of Herbert Hasler, who was influential in the development of the post-war formation of the Special Boat Service. Goulding was very possibly at least as influential, although records of him are remarkably thin on the ground.

Harold Goulding's granddaughter reports that her grandmother extreme difficulty getting a war pension - reportedly it took decades. This seems incongruous for the widow of such a high ranking and celebrated war hero.[24]

His surname was misspelled in the Commonwealth Grave records as "Gouldin", being corrected only after his granddaughter pointed the matter out.[25][26] 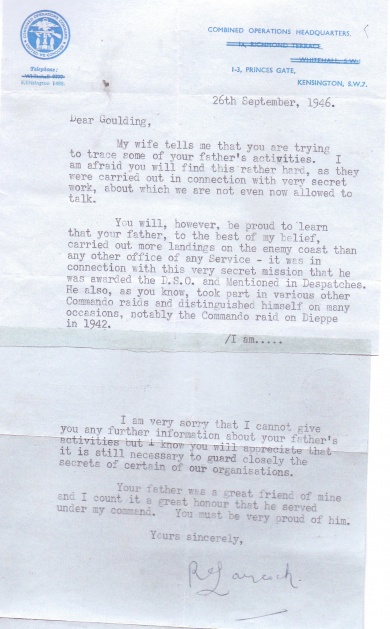 Robert Laycock wrote a letter on 26th September 1946 to Harold Goulding's son. He noted that Goulding was connected to "very secret work" and stated that he had "distinguished himself on many occasions, notably the Commando raid on Dieppe in 1942".