There was no official narrative about the DEA's Special Operations Division until their existence was betrayed by information from the Edward Snowden Affair. As of February 2014, Wikipedia had one sentence about the group: "The DEA Special Operations Division (SOD) is a secretive division within the DEA, which forwards information from wiretaps, intercepts and databases from various sources to federal agents and local law enforcement officials."

The group includes not only DEA staff, but also representatives from the FBI, CIA and NSA.[1]

The technique of Parallel Construction allows the group to use classified information obtained by illegal mass surveillance (normally disbarred) by the simple expedient of hiding it from the prosecution, defense, judge and jury alike. The sensitive information is used to derive an alternative means of having plausibly obtained it. DEA training documents suggest this method of reconstructing evidence chains is widely taught and deployed.

MuckRock obtained training documents which were heavily redacted and gave only limited information into the parallel construction method, leaving unanswered many questions especially when it comes to logistics and legal justifications. What could not be clearer, however is the extent of the high priority which the DEA attaches to protecting its intelligence resources.[1] 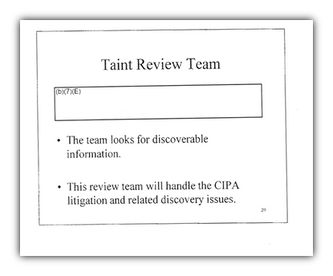 A redacted record, courtesy of MuckRock

Sometimes the technique of "Parallel Construction" is ineffective at hiding the use of classified evidence. In this case, a wholly separate squad of prosecutors called the Taint Review Team will consult with the judge to determine which evidence must be turned over to the defense. SOD teaching materials disclosed in 2014 refer to a previously unknown "Taint Review Team" to tackle pre-trial review so that the trial prosecutor encounters as little classified evidence as possible.[1]