“Extreme forms of monitoring, whether by the KGB in the Soviet Union, the Stasi in East Germany, or Big Brother in 1984, are essential elements of all tyrannies, and technology is making both monitoring and the consolidation of surveillance data easier than ever.”
Robert Epstein (18 February 2016)  [1]

Mass surveillance is increasingly carried out by governments the world over. The most common purported justification is the "war on terror". The extent is not publicly disclosed, but rapid development in mass surveillance technologies and large budgets which remain classified behind veils of "national security" suggest that its extent and sophistication may be more than is generally realised. In military or intelligence terms surveillance is often a preparation for an attack.

Mass surveillance is usually presented by the commercially-controlled media as being a necessary evil to fight the "war on terror". The official opposition narrative - the other end of the spectrum of opinion presented by corporate media - does not question that civil rights must be trade off for protection against "terrorism", so if differs only about only how much mass surveillance is an acceptable compromise between safety and liberty. Both the official narrative and its opposition neglect to mention that, since Edward Snowden's revelations have demonstrated that illegal mass surveillance was being carried out widely and systematically, and since no one has been charged - or even accused - as a result, it is reasonable to assume that the major limitations to mass surveillance are technical rather than legal.

No evidence has been presented that mass surveillance was intended to stopping "terrorism". Several NSA whistleblowers such as William Binney, Russell Tice and Thomas Drake have directly challenged this claim, arguing that by contrast, it makes the US public less safe rather than more.[2] The "Surveillance State Repeal Act" was introduced into US Congress in March 2015, to end the US PATRIOT Act and reform the NSA.

A simpler explanation suggests that it is "a corrupt power grab... not an effort aimed at stopping terrorism".[3] In 2017, the United Nations' Special Rapporteur on the right to privacy echoed this sentiment in more diplomat terms. Criticising recent mass surveillance laws in France, Germany, the UK and the USA, he stated that they are "predicated on the... disproportionate though understandable fear that electorates may have in the face of the threat of terrorism" but are informed by "little or no evidence" of their "efficacy or... proportionality".[4]

The "War on Terror" has repeatedly used false flag terror attacks, in conjunction with a compliant commercially-controlled media to try to instill fear in people. Deliberate vagueness about laws and increasing use of guilt by association are intended to chill dissent in an effort to introduce new mass surveillance technologies. This has been particularly useful in countries such as the USA and the UK which had laws and traditions about privacy which, if enforced, would have prevented such surveillance. A widespread culture of impunity for those who control the structures of Western nation states mean that few (if any?) serious commentators regard such objections to mass surveillance as effective in practice - the only remaining limitations on data collection are purely technical in nature. UN Special Rapporteur on Privacy, Joseph Cannataci referred UK's oversight of surveillance as “worse than a bad joke.”[5]

Harry S. Truman was concerned about the power accrued by both the CIA and the FBI. In 1947 he wrote about the FBI: "Edgar Hoover's orgnization would make a good start toward a citizen spy system. Not for me."[6] 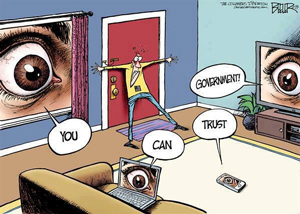 The rise of electronic communication methods have lead to a burgeoning of the mass surveillance in the 21st century. The blatant - and unpunished - disregard for the law by both NSA and GCHQ should leave little doubt that legal restrictions are mostly left for show.

Various electronic devices have made audio recordings and for internet behavior.[7][8]

In August 2019, Motherboard wrote that Microsoft contractors have admitted to listening to users of XBoxes they "said that recordings were sometimes triggered and recorded by mistake".[9]

While the Internet was designed to be decentralised, and so non-trivial to censor/monitor, the NSA has been consistently trying for decades to stifle an effective roll out of cryptography for decades. Several whistleblowers have revealed that the NSA has fiber optic splitters which allow for monitoring of huge amounts of data. The connection with internet censorship is clear; when everyone's posting is watched, unwanted content is easily removed, moreover, self-censorship may become endemic due to fear of reprisals - Webster Tarpley and others have suggested that this perspective may help understand the Edward Snowden Affair, and would tally with a large number of disclosures of mass surveillance of other natures made recently.

Common operating systems on the market like Microsofts Windows, Apples IOS and Googles Android are mostly used with an online connection. The devices that run these operating systems, by design will become the first functioning part of the data collection process over the Internet which the user has no real overview of.

The official narrative of watch lists is that they help assist law enforcement in prevention of terrorist activity. In practice, however, they are better understood as a means of mass surveillance (because everyone has to give their details, to prove that they are not on a watch list). Since the management of these lists is completely opaque, they can also be understood as a precursor to the enforcement of a heavy-handed police state - one in which individual rights are conditional and can be revoked at a moment's notice without the need for such matters as evidence of wrong doing.

After the 2001 anthrax attacks, which were initially blamed on "Islamic terrorists", although the anthrax was later proved to have come from a US military laboratory, the US government secretly instituted a program to photograph all the mail sent in the US. This went undisclosed to the general public for over a decade. In 2015, it was revealed that the US Postal Inspection Service had installed a utility box "positioned to capture and record the license plates and facial features of customers leaving a Golden Post Office." [10]

In 2013, in response to a subpoena for cellphone data, the NSA claimed that "The government does not possess the records the defendant seeks", i.e. specifically denied that they had collected cellphone data, although the Foreign Intelligence Surveillance Act court order stated that they could have collected this data.[11] At the same time all of this type surveillance data is available for the cellphone network providers, whose data the NSA may access with ease, irregardless of any legal regulation. Apple does have a history of collecting location data secretly.[12]

Many governments of the world admitted to using cellphone data during the Covid-19 pandemic, prompting questions about whether it would ever be rolled back.[13][14][15] 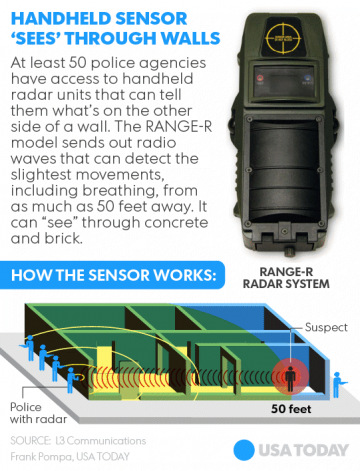 The Range-R system is one of a number of such devices that have been developed in recent years.[16] These are battlefield technology that is becoming available for police forces.[17] 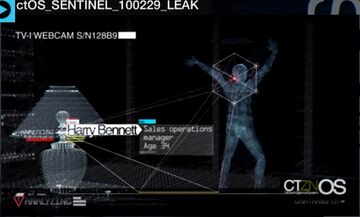 A screenshot from the 2014 video game Watch Dogs. The game depicts a future in witch a city is completely monitored 24/7, including the living quarters of all citizens. Research by MIT professor Dina Katabi[18] in 2020 is in such an advanced stage, that a signal emitting device can monitor the breathing of a person.[19] Papers have been published which show, that from regular Wi-Fi signals alone, the movement of a person can be calculated.[20][21]

The US military has developed new surveillance technologies which - with or without trialling in war zones overseas - are being rolled out across the country. Legal barriers are no effective impediment in what many have termed a police state. These include surveillance by Reaper Drones[22], Hand Held Radar[23], Cellphone Surveillance Tools[24], X-Ray vans[25] and automatic recognitino of faces, car license plates and other data from CCTV by computers.[26][27]

The commercially-controlled media has not dwelt on the illegality of mass surveillance carried out continuously by intelligence agencies. Instead, the political establishment has moved to legalise such actions, under the pretext of the threat of "terrorism". Only token discussion has ever been made in corporate media about whether mass surveillance is helpful in this regard.

“Perhaps the most curious thing about the response to revelations concerning the extent of modern mass surveillance is that most people in the West have not seemed to mind; we have not perceptibly altered our online behavior or demanded a response from our governments. We seem not able or willing to grasp the implications, and we have shown a weary cynicism that evidently masks a deeper indifference. Many have shown an eager complicity, free of defensiveness. If you are innocent, you have nothing to fear, we insist, forgetting the innocence of millions interned and murdered by Western governments within living memory. Surveillance will keep us safe from our enemies, we say, obediently accepting the pronouncements of our governments on the identities of our enemies and the proper sources of our terror.”
Amanda Power (February 2016)  Under Watchful Eyes [28]

A Mass surveillance victim on Wikispooks

8 November 2017 Robin  A good overview of this important topic