From Wikispooks
< 2016 Brussels Bombing
Jump to navigation Jump to search 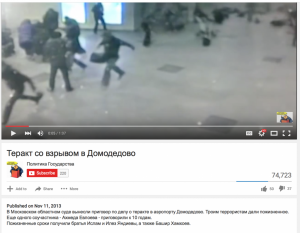 Still from video of the Domodedovo International Airport bombing

One of the first videos published by Belgium’s commercially-controlled media was, according to reports, from the CC security surveillance cameras at Brussels airport. The video report was released at 9.07am, one hour after the first bomb attack at the airport.

The video was fake. What Derniere Heure and La Libre published was footage from a January 2011 terror attack at Moscow International airport.

What Derniere Heure did was to take the Moscow International airport video, remove the audio in Russian, change the date and broadcast it on the Internet and network TV at 9:07 AM.

The case of this fake airport surveillance video is fully documented in a 23 March 2016 Global Research article. [1]