On 22 March 2016, three attacks were carried out in Brussels which were even more deadly than the Operation Gladio-linked Brabant Massacres of the 1980s. These occurred four months after the Mass murder in Paris,[2]

On the morning of 22 March 2016, explosions occurred at Brussels main airport in Zaventem and one at Maelbeek metro station in the centre of Brussels. Suicide bomber Khalid el-Bakraoui was quickly identified.[3] Not including the perpetrators, 35 people were killed and 261 others injured. An assault rifle and a third bomb were found in a search of the airport.[4] The Islamic State claimed responsibility for the attacks,[5] based on information emanating from social media.

The choice of a soft target suggests that the attack may be a false flag under Operation Gladio/B intended to shape public opinion. If NATO had been the target, then those responsible might have chosen a harder military target such as the nearby NATO headquarters.

An eyewitness airport worker Tom Donker reports seeing a soldier at the bomb scene ready to deal with the dead and injured bodies.[7] No official announcement of an ongoing drill going has been made.

CNN broadcast CCTV footage, stating that it was from inside Maelbeek Metro station, but it was shown by The Independent to be from the 2011 Minsk Metro bombing.[8]

A previously unknown self-proclaimed "news agency" (Amaq Agency) - claiming to represent ISIS and whose website has no content dated earlier than 4 March 2016, provided the following report:

Brussels – Amaq Agency: Islamic State fighters carried out a series of bombings with explosive belts and devices on Tuesday, targeting an airport and a central metro station in the center of the Belgian capital Brussels, a country participating in the international coalition against the Islamic State.

Islamic State fighters opened fire inside Zaventem Airport, before several of them detonated their explosive belts, as a martyrdom bomber detonated his explosive belt in the Maalbeek metro station. The attacks resulted in more than 230 dead and wounded.[9]

Apparently well organised social media campaigns have spreading have deliberate disinformation about Brussels Attacks, implying a wider orchestrated attempt to control the narrative, in short, a propaganda campaign. But by whom? Who controls the Amaq Agency site which is hosted on a free account provided by Wordpress? The answer to that question is important because the site appears to be the earliest and primary source of subsequent commercially-controlled media claims of ISIS responsibility for the attacks.

Belgian authorities claims were uncritically reported by commercially-controlled media. Young reporters in Brussels regularly presented police or other official statements as 'fact', failing to question the official narrative and failing to attribute assertions to whichever agency they've got them from, mixing up fact with speculation. Nothing was said about Operation Gladio.[10] Western media coverage of Brussels was extensive, as compared to the Saudi Arabian bombing raid a on a market place in Yemen where 80 people were killed the week before.

On the day of the Brussels attacks, Sott.net published an article suggesting they could have been a Gladio/B operation, opining that "One has to wonder then how closely the Pentagon's Cold War strategy is being followed today, and if it involves similar false-flag terror attacks against the civilian population of Europe in order to create a climate of insecurity under which more authoritarian policies can be imposed on the public. One also has to wonder about the strange coincidence of Turkey's President Tayyip Erdogan warning just a few days ago that 'there is no reason why the bomb that exploded in Ankara [on 12 March 2016] could not explode in Brussels.'"[11]

The increasing number of supposed suicide bomber attacks in Western Europe which closely follow the script of Operation Gladio/B has lead Sibel Edmonds, James Corbett and others to suggest that the Brussels attacks might well be another act of false flag terror as part of a strategy of tension designed to promote fear and prevent the public from understanding their governments true role in the world.[12][13]

Former Belgian Member of Parliament Laurent Louis has suggested that the intelligence agencies may have been involved in carrying out the March 2016 Brussels bombings.[14]

There was immediate pressure for European intelligence services to relinquish sovereignty in 'intelligence sharing' agreements.[citation needed]

A week after the Brussels attacks, former British prime minister Tony Blair called for Britain to step up military action to “crush” ISIS or be faced with a terrorist “act of such size and horror” that it will result in “many more victims” than the atrocities in Brussels and Paris. Accused by some of scaremongering, and echoing the views of US presidential hopeful Donald Trump, Blair wrote in The Sunday Times:

“ISIS has to be eliminated with greater speed and vigour. Where they need active on-the-ground military support from us, we should give it. They have to be crushed.”[16]

European Commissioner for the Security Union

The post of European Commissioner for the Security Union was created after a speech by Jean-Claude Juncker in the aftermath of the bombing.[17]

Echoing the Charlie Hebdo event, a follow up march was planned. 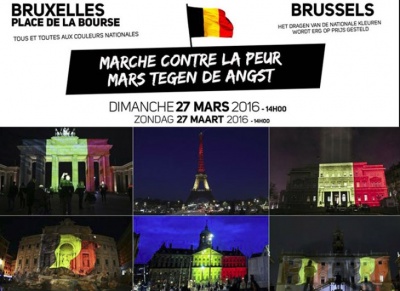 The organisers of a March Against Fear planned for Sunday, 27 March 2016 to mark the Brussels terror attacks said they had cancelled the event after the Belgian authorities asked them to do so because of security fears and to allow the police to concentrate their resources on the investigation into the attacks:

“We understand this request. The security of our citizens is an absolute priority. We join the authorities in proposing a delay and ask people not to come this Sunday,” the organisers said in a statement on Easter Saturday.

"Is everyone taking note on how the false flag script is developing? Apparently staged attacks that take place in Europe are followed up by these weird 'anti-fear' marches which only serve to bring more attention to the false flag event and 'state-sponsored terrorism'. It’s all part of the terrorism propaganda, fear and social engineering that the state is exerting over the masses on their road to their new global order. The irony of seeing the March Against Fear cancelled by 'fear' itself only goes to show that there is nothing genuine and organic about this effort. It also shows us that the state, not the people, is controlling these events."[18]