Corporate/commercially controlled media (CCM), also termed big media, legacy media,[1][2] old media[3] or (misleadingly)[4] mainstream media (MSM) is a set of corporations whose main output will be familiar to most, i.e. BBC, CNN, Washington Post, New York Times etc. Their censorship and control by the deep state are primary reasons that this website was set up.[5]

Echoing the official narrative of its longer established bedfellows, Wikipedia refers to the large news conglomerates with their preferred self-description, the "mainstream media" (MSM). As of January 2017, the Wikipedia page had lead for some years with a reference to a 1997 article by Noam Chomsky, stating that "Mainstream Media" (MSM) "both reflect and shape prevailing currents of thought".[6] This is an uncomfortable fit with a September 2016 poll finding that found only 32% of US adults trusting big media "to report the news fully, accurately and fairly."[7]

The wikipedia page itself refers to the massive media consolidation in the US (though Wikipedia editors have removed details of its extent).[8] Considering that corporate media has a hierarchical structure this renders them easily controllable, rendering the idea of big media as "reflective" of public opinion as highly suspect. Since the news agenda is dictated by a very small number of very rich individuals, it has been suggested that the phrase "mainstream" would be more accurate if replaced by a label which respected the plutocratic agenda it promotes.[9] On Wikispooks, the term CCM (Commercially/Corporate Controlled Media) is preferred.

A lot of topics such as popular culture, celebrities etc. are of only marginal interest to deep state forces. On those which are of interest, a range of of measures combine to give more or less (generally more) effective control over what is published. The formal hierarchy of editor control is only the most obvious of a whole suite of methods to regulate the output of the corporate media. The net result is that certain established official narratives are promoted - as are those who think in these terms and can naturally write convincingly about them; conversely, those who are set on expressing alternative evidence or opinions find their careers as professional journalists short-lived. Although so pervasive as to be almost universal,[10] this deep control goes unnoticed by many in the profession, whose reporting remains so far from matters of interest to the deep state that is remains outside their experience.

Corporate media attempt to maintain plausible deniability as a fallback position in case their lies, whether of omission of commission, or exposed later. The 1995 case of Steve Wilson and Jane Akre clarified an important point, although it was not widely reported in US at the time. The couple were fired when they refused to tailor their investigation into RBGH to suit Monsanto's wishes[11]. Ruling on their case, a Florida Court of Appeals unanimously agreed that their employer could demand that they lie since there is no rule against distorting or falsifying the news in the United States.[12] An uncertain but large proportion (perhaps >50%) of TV news footage in USA is in fact VNRs (video news releases) produced by 3rd party corporations, as a kind of stealth advertising that masquerades as news. 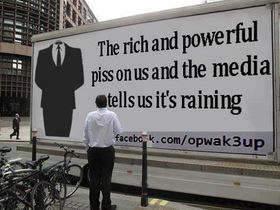 The US public no longer has much faith in corporate media; the proportion of Americans expressing a “great deal of confidence” in the press has fallen from 28% in 1976 to just 8% in 2016.[13] This trend may have inspired the "fake news website" campaign of late 2016 which blewback into the popularity of the phrase "fake news", which continues to inpire people to cross check media sources, further undermining faith in sources which are mendacious. 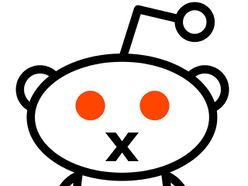 “I am confident that there is conversation inside the Government as to ‘How do we deal with Sibel [Edmonds]? The first line of defense is to ensure that she doesn’t get into the [corporate] media. I think any outlet that thought of using her materials would go to to the government and they would be told “don’t touch this...””
Daniel Ellsberg (2014)  [14]

Internet censorship is of necessity more complex and varied where many users can post. Covert censorship is generally preferred, but sometimes overt censorship is resorted to. Wikipedia has its own censorship practices. Reddit is subject to censorship and control.[15] In November 2016 Reddit banned a group which was investigating top level pedophilia in US society to prevent a "witch hunt". The group continued their investigate at voat.co, an alternative platform not owned by Conde Nast. The group has compiled a list of dozens of corporate media outlets which removed related content.[16]

The sudden about face of the UK's best selling newspaper, the Sunday Times as regards Sibel Edmonds could be likened to that of the San Jose Mercury News after Gary Webb revealed the CIA's deep involvement in drug trafficking. Both papers, after initially carrying out their own research to verify the information, backed their source's extraordinary revelations. Both however sudden reversed their policy without providing an explanation.[17]

“[The] investigation based on Edmonds’ information was supposed to have four parts, but was inexplicably dropped. “The story was pulled half-way, suddenly, without any warning”, the journalist said. “I wasn’t party to the editorial decision to drop the story, but there was a belief in the office amongst several journalists who were part of the Insight investigative unit that the decision was made under pressure from the U.S. State Department, because the story might cause a diplomatic incident... The way the story was dropped was unusual, but the belief amongst my colleagues this happened under political pressure is plausible.” He cryptically described an “editorial mechanism, linked to the paper but not formally part of it, which could however exert control on stories when necessary, linked to certain interests.” When asked which interests, the journalist said, “I can’t say. I can’t talk about that.””
An unnamed "lead reporter" on Edwards' series at the Sunday Times. (January 2008)  [18]

Certain topics - such as the 2001 Mexican legislative assembly attack, the Dallas occupy plot to assassinate leaders of Occupy Houston, and the 60+ year history of Le Cercle - have been subject to an almost total media blackout, though solid primary sources exist[19][20] and they are events of major significance with far reaching implications. Shai Masot‎ disappeared from the corporate news agenda after he was exposed as a spook, although he did not retire.[21] 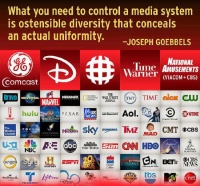 The audience of several corporate media companies (such as MSNBC, Fox News and CNN) declined significantly in 2013[22] suggesting that viewers were going elsewhere for information. The main alternative to the corporate media is the internet, where a multiplicity os smaller sources (such as Wikispooks) provide an alternative to the online corporate news sites. One response to this has been to ramp up propaganda about "cyberterrorism" and to expand internet censorship under pretexts such as the "war on terror" or the protection of "intellectual property". 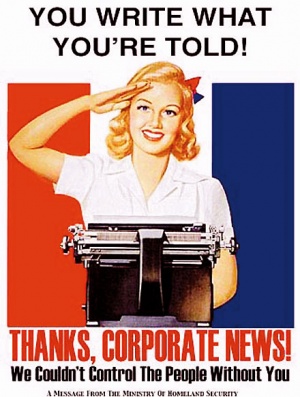