Alcohol is a popular recreational drug. It is legal in many areas of the world, and generally subject to legal restictions and taxes. 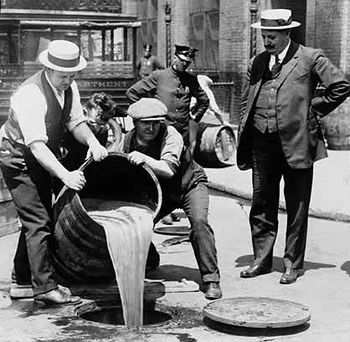 In 1920, drinking alcohol, or the production of ethanol for any purpose, was forbidden in USA. This not only proved a boon to organised crime, but also cemented the position of oil as the fuel of choice for vehicular transport.

Regular consumption of smaller amounts is not generally seen to be damaging to health, and may be beneficial.

Chronic consumption of large amounts of alcohol, alcoholism, is very damaging to human health. In 2017, around 1/8 of the US population were reportedly alcoholics.[1] NPR reported in 2020 that U.S. Alcohol-Related Deaths Have Doubled.[2]

Drinking alcohol is forbidden for Moslems and is illegal in some nations. It is a matter of interest that the 9/11 Commission report noted that Satam al-Suqami and Salem al-Hazmi, supposedly "Muslim terrorists" were "known to drink alcohol."[3]

A Alcohol victim on Wikispooks