Alisha Owen testified that she was repeatedly raped as part of the Franklin child prostitution ring, from the age of 14.[1]

Owen's parents were "stable church-going Christians who happened to have energetic, rebellious teenagers. teenagers. At the age of 14, she fell in with the wrong crowd, started going to Larry King’s parties, and later claimed that Robert Wadman, the Omaha chief of police, had raped and impregnated her and shoved the barrel of his gun up her vagina. She was put on trial for perjury."[2]

"Under enormous pressure from the media and law enforcement to recant, she refused. Friends who previously supported her story did recant and testified against her (and later recanted their recantations). Her younger brother, under arrest for joy riding in a stolen car, was found dead in his jail cell shortly before her trial. It was ruled a suicide despite indications of a beating before he ostensibly hanged himself. Nick makes a strong case that Owen’s lawyer, Pamela Vuchetich, was having an affair with the FBI agent, Mickey Mott, who appears to have been orchestrating Owen’s prosecution. Just before Owen’s trial, Vuchetich abandoned her client and started representing two key witnesses for the prosecution."[2]

Alisha Owen was interviewed by Gary Caradori in 1989. "Initially hesitant to discuss her past... she eventually confessed to her involvement in Franklin and specified perpetrators whose names had repeatedly surfaced throughout Caradori’s investigation. At the conclusion of the interview, Caradori asked Alisha if she would be willing to make a formal statement the following week. Alisha said she needed to sound out her parents, because she felt that her cooperation would potentially endanger her family members."[1]

Owen was sentenced to 9-15 years for 8 counts of perjury, but served only 4½ years.

On November 7, 1989 at York Reformatory, Owen was incarcerated on a 3 to 4 year sentence for writing “bad checks”, when she was interviewed by Gary Caradori.[1] 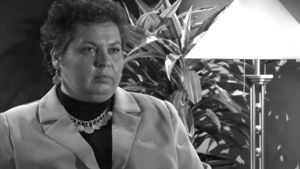