The Franklin child prostitution ring existed in the 1980s, and was carried out by the US deep state for purposes including fun, profit and especially sexual blackmail.

“The Franklin scandal is about an interstate pedophile network that flew kids from coast to coast. What we are seeing with Jeffrey Epstein, we saw in the Franklin scandal, although I think the Franklin pandering network was much, much bigger than Jeffrey Epstein’s network. There were two primary pimps. There was a pimp in Nebraska, Larry King. He was getting children that had fallen through the cracks, from foster-care homes, from Boy’s Town Orphanage and from some other institutions. There was another pimp living in Washington, DC, who was involved in this, Craig Spence, who had his home wired for audio-visual blackmail. Anybody who took part in any of those parties at Craig Spence’s home was definitely blackmailed. Social services ultimately found out about that network and they went to both state and federal law enforcement. These social service personnel were simply ignored by both federal and state law enforcement – just ignored. However, ultimately, there was an investigation because one of the accused pedophiles, Larry King, had embezzled $40 million from the Franklin Savings and Loan, which he was manager of. They formed a sub-committee to look at King’s embezzlement of money. And as soon as the committee formed, the social services personnel went and said, "Larry King is a thief but he’s also a pedophilic pimp." And then they started to look into it and that’s when things started to happen...”
Nick Bryant (January 16, 2020)  [1]

Several victims testified to repeated sexual abuse. "When the Franklin case first came to light in 1988-90, numerous child victim-witnesses, including Paul Bonacci and Alisha Owen, testified to investigators for the Nebraska Senate’s Franklin committee, that a man named 'Rusty Nelson' was the private photographer of King, and that Nelson, at King’s direction, had taken thousands of pictures of incidents of sexual abuse. Chief Wadman, named by Owen as her primary abuser, “investigated” charges of pornography which had been lodged against Nelson, but Wadman found that Nelson was “involved in a legitimate business,” though Wadman had to acknowledge that Nelson was living in an apartment rented for him by King. Shortly thereafter, Nelson disappeared from Nebraska, until he showed up as a surprise witness in court on Feb. 5, 1999. Some years later after his disappearance, Nelson had been arrested by police in Portland, Oregon, on pornography charges."[2]

On June 21, 1991, 21-year-old Alisha Jahn Owen was pronounced guilty by a jury in Douglas County, Nebraska, on eight counts of felony perjury. On August 8, 1991, she was sentenced to serve nine to twenty-seven years in prison.[3] This, despite a law giving immunity to those who name their abusers in sex abuse cases.

Paul Bonacci named his abusers in front of the Franklin Jury. He was initially indicted on charges of perjury but in 1999 he won a $1 million law-suit against Larry King with the help of his lawyer John DeCamp.[4]

Troy Boner testified to investigator Gary Caradori‎ of repeated rape and sexual abuse.[5] Boner later recanted this testimony after his brother, Shawn Boner, was fatally shot in suspicious circumstances. Alisha Owen was convicted of perjury partly on his evidence in court. Boner later reported in a re-recantation in the film Conspiracy of Silence that he had been threatened by the FBI. He died of a suspected drug overdose in 2003.[6][7] 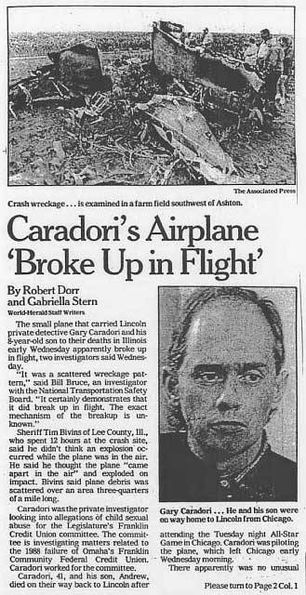 The sudden death of Gary Caradori‎ was the most dramatic element of the cover-up, which included other assassinations, blackmail of witnesses and the extraordinary sentence for perjury given to Alisha Owen. The cover up continues to this day with censorship of Wikipedia. Interest in the case has markedly increased after the Pizzagate allegations.

Wikipedia's corresponding page, as of 2019, was semi-protected, entitled "Franklin child prostitution ring allegations", and the one sentence lead concludes that "separate state and federal grand juries concluded that the allegations were unfounded and the ring was a “carefully crafted hoax”."[11] The page history reveals a history of reversions taking place within 24 hours, sometimes within minutes. User MONGO appears to be a gatekeeper.[12][13]

US Senator and lawyer John DeCamp‎ has lead the exposure of this event. He wrote the book Franklin Cover-Up about it. In November 2016, Steve Pieczenik tweeted about a book by Noreen N. Gosch, in relation to the Franklin child prostitution ring "this goes way back, sorry 2 break it 2 you, its real."[14] Nick Bryant wrote "The Franklin Scandal: A Story of Powerbrokers, Child Abuse & Betrayal".[15][16] Conspiracy of Silence is a documentary about the case that has never been officially released.

The Washington Times of 29 June 1989 had a large article about the Franklin child prostitution on its coverpage. The New York Times did report about the early stages of the investigation as well, subsequent coverage by commercially-controlled media has been more guarded.

In February 2017, Joseph Lloyd made a FOIA request for MuckRock about the "Franklin child prostitution ring allegations", but it initially returned no documents. As of September 2020, it was still under process, the last reply from the FBI, in 2019, indicated that it might take years.[17]