Andrew Krieg is an investigative journalist, legal reformer and author of Presidential Puppetry: Obama, Romney and Their Masters.

Krieg has had careers in law, business, journalism and non-profit advocacy and has worked in Washington DC for over 25 years. He has authored many bylined news and magazine articles.

He was President and CEO of the Wireless Communications Association International from 1996 until 2008, during which time he led its evolution into the premier worldwide advocate for high-capacity wireless services. Such services include tech-enabled efficiencies in community economic development, education, green technology, health care, military preparedness and public safety protections for homeland security.

As of 2018 he was Executive Director of the Justice Integrity Project, created to improve oversight of federal white-collar prosecutions. 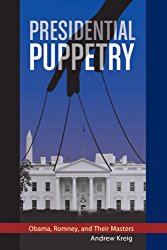 Krieg wrote Presidential Puppetry: Obama, Romney and Their Masters, which Mark Gorton mentions on his "Introductory Reading List" at the end of his Document:The Political Dominance of The Cabal. John Perkins said about the book that that it was "one of those books that inspires readers to look deep beneath the surface."[1] In Autumn 2016, he has appeared on RT to discuss the 2016 United States presidential election and the connections between the US intelligence agencies and the presidential candidates.[2]